Ali Hassan, of Stockton, holds his dying 2-year-old son Abdullah’s hand at the UCSF Benioff Children’s Hospital in Oakland. The boy mother has been banned from coming to the US to see her son before he dies. (Council on American-Islamic Relations, Sacramento Valley).
aaa

OAKLAND – A Yemeni mother who was earlier barred from traveling to the United States to visit her dying 2-year-old son due to the Trump administration’s Muslim travel ban has received a waiver to come to the States, her lawyer said Tuesday.

Shaima Swileh’s lawyer, Saad Sweilem, told The Chronicle that she had been called Tuesday morning to the US Embassy in Cairo, where she is living, to receive a presidential proclamation waiver and a visa, clearing the way for her to travel to the US.

“She is very relieved, very thankful, and she just cannot wait to come and see her son,” Sweilem said.

“We are happy that she can kiss and hold her son one last time,” he added.

The Muslim mother has been pleading over the past months to get a waiver to allow her to see her dying 2-year-old son.

“My wife is calling me every day wanting to kiss and hold our son for one last time,” the boy’s father, Ali Hassan, said on Monday during a press conference in Sacramento where he broke down in tears as he asked for help, Mercury News reported on December 18.

The Yemeni mother was hoping to receive a waiver that would allow her to travel from Cairo, Egypt to the UCSF Benioff Children’s Hospital in Oakland, where her dying son Abdullah is barely hanging on through life support.

The little boy has a genetic brain condition that is getting worse every day. It’s not known how much time he has left to live, and doctors said his little body might not be able to withstand life support much longer.

Both the boy and his father have the American citizenship and live in Stockton but because of the Muslim Ban 3.0, which prohibits nationals from eight Muslim countries from entering the US, the mother had to stay behind in Egypt. 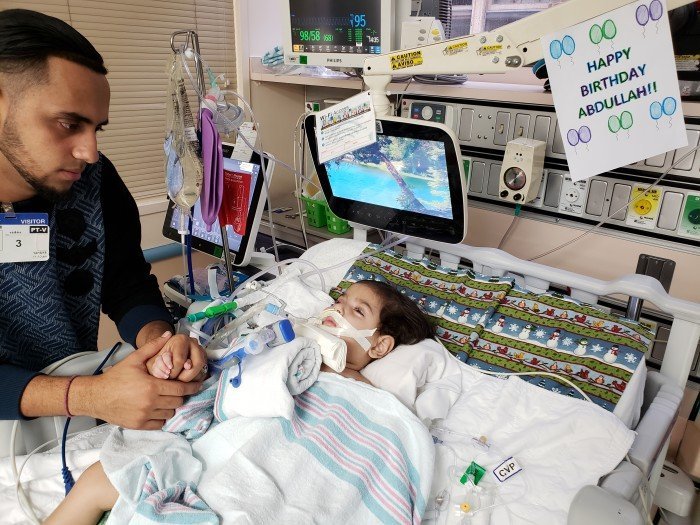 The Muslim family tried to apply for a waiver so Swileh could see her kid one last time, but her permission has just been granted.

On their behalf, Saad Sweilem, an attorney for the Council on American-Islamic Relations (CAIR) in Sacramento managed to drum up national support for such a waiver.

“He deserves the love and affection of his mother, one last time,” said Sweilem, a civil rights attorney representing the family. “We shouldn’t be forcing our own American children to die without a mother’s love.”

CAIR urged Americans to sign a petition and call their representatives in Congress. The Muslim organization has also filed a writ of mandamus asking the courts to force the federal government to expedite a response to the request for a ban waiver.

Furthermore, Basim Elkarra, CAIR’s Sacramento director, informed that the organization is ready to fly out the mother to the US at a moment’s notice if the waiver is granted by the American authorities.

In addition, some leaders from other American faith organizations including Jewish and Christian also attended Hassan’s Monday press conference to speak on behalf of the family and support the father.

Betty Williams, president of Sacramento chapter of the National Association for the Advancement of Colored People (NAACP), a civil rights organization, decried a ban that prevents a mother from holding the hand of her dying child.

“It’s criminal that we’ve to beg for the last rites of a child,” he said.