NEW YORK – Winning gold medal in Rio for her country six months ago, Olympic hurdles runner Dalilah Muhammad has never expected that her name and faith would be targeted by the same country she calls home.

“It’s insane what’s going on and what America is becoming,” Muhammad told the Guardian in New York this weekend, where she opened her season with a 500m race at the Millrose Games, The Guardian reported on Monday, February 13.

“It’s frightening and a little scary.”

Six months ago, the New Yorker won Olympic gold in the 400m hurdles.

Muhammad, born and raised in Queens, was watching on from her training base in Los Angeles when Donald Trump was inaugurated as US president last month and swiftly issued an executive order banning immigration from seven Muslim-majority nations.

Though Muhammad is a US citizen, she admits there are lingering concerns about travelling abroad to race on the track and field circuit.

Later this week she will fly to the UK, where she will compete in 400m race.

“My Nike reps were a little nervous about me travelling just because of my name,” she said.

“It makes me a little bit worried, given I travel so much. To have the name Muhammad attached to me makes it a little scary.” 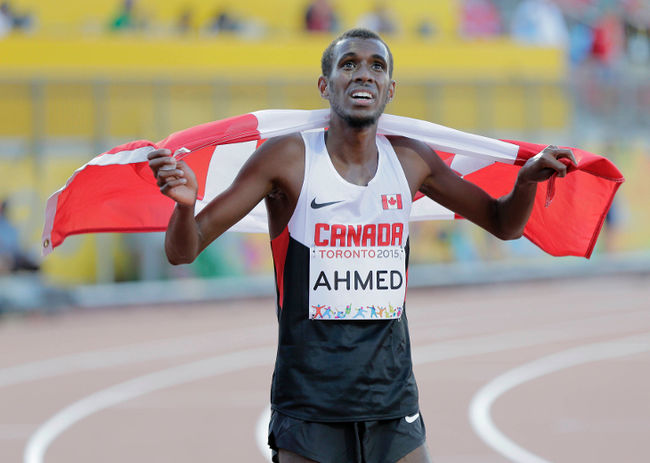 Muhammad is not alone in her ordeal.

At the Millrose Games on Saturday night, other Muslim athletes echoed Muhammad’s concerns about the travel ban, such as Canada’s Mohammed Ahmed, who was born in Somalia but  lives and trains in Portland, Oregon.

“Because of my place of birth and my name, I’m always going to get stopped at airports and get extra screening,” he said.

“I’ve had to deal with that my whole life. I’ve spent a lot of hours at airports, missed flights. When I was younger it annoyed me a bit, because I was like: what’s wrong with me? As I’ve got to experience that more, I’ve come to realise that they’re doing it for a reason, as bigoted as it might seem.”

Sifan Hassan, a Muslim athlete from the Netherlands, admitted that she had similar concerns after relocating to Portland in recent months.

“I feel so bad,” said Hassan, who fled Ethiopia as a refugee at the age of 16.

“It’s very painful. In the Netherlands it’s much better. What Trump is planning to do to Muslims, it’s not good. It’s just going to cause more problems.”

Winning the prestigious Wanamaker mile on Saturday night in 4:19.89, the fourth fastest indoor time in history, Hassan said she has been encouraged by the response of the American people to Trump’s travel ban.

“The people are so fantastic here,” she said. “But I just wish [Trump] would look at everybody like himself.”

Muhammad also had a few words to offer to her president.

“I guess I would say to him we’re all the same, no matter what our beliefs.”