DETROIT – Like most Muslim kids in the US, Samar Baydoun Bazzi never got a chance to celebrate the beginning of the holy fasting month of Ramadan with due festive cheer and decorations.

Now 29-year-old, the Muslim mother decided to take matters into her own hands by creating moon-shaped Ramadan trees.

“You gotta pray and fast, and you want to become closer to your creator. But I never as a kid felt like there were any decorations or like a celebration. I wanted something exciting.”

She began by decorating her west Dearborn home with Islamic-themed art, like acrylic paintings of Arabic calligraphy and a cardboard model of a mosque.

Then she started creating moon trees in her basemen through artificial Christmas trees, twisting and bending them into the shape of a crescent moon.

The first crescent tree took her 20 minutes to make and it “died,” Baydoun Bazzi said.

Now the trees take her anywhere from two to five hours to shape because she wants to ensure they’re stable and won’t fall apart.

Since January, she has sold about 40 trees, which cost $150, come in two colors, forest green or white, and come with lights and an ornamental star of either five or eight points.

As Ramadan approaches, she gets more orders and now has a waiting list of 20.

Suzanne Jaber, 44, of Dearborn Heights started making her Crescent Moon Trees in 2015 and uses them to celebrate Islamic holidays year-round, including Ramadan, Eid al-Adha, and Mawlid al-Nabi, the prophet’s birthday.

“It wasn’t foreign for us to put a Christmas tree in Lebanon,” Jaber said.

“So when we came here, we did put it for few years, but when I got married, I didn’t put one because I always thought if my kids weren’t good religious enough, their kids and, you know, maybe their other generations, they put a Christmas tree, they would think they’re something else other than Muslim.” 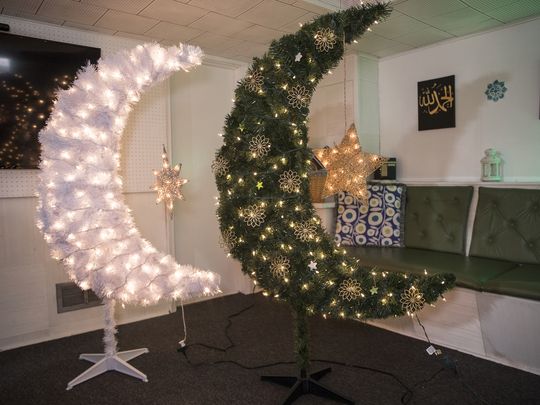 The new moon trees were filling a void for many American Muslim customers.

“I’ve had customers come to me and tell me, ‘Where was this when I was growing up?’ ” Baydoun Bazzi said.

Rochelle Salha, 53, of Dearborn said her kids were excited when she bought the Ramadan Tree from Baydoun Bazzi.

“They really do feel like they’re part of something, you know, even though we do all the Ramadan things,” Salha said.

Salha, who grew up Christian and converted to Islam, said that she bought the tree last Ramadan.

“It makes them feel more like it’s a holiday,” she said.

The similarity to Christmas has brought about some criticism, Baydoun Bazzi said.

“That’s not my intention,” she said, adding: “Honestly, all of us that make them just want to make our children happy. That’s my main reason.”

Eman Saleh, 31, of Dearborn, is another customer who bought a Ramadan Tree for her 7-year-old daughter, Amira, around Christmas.

“So I’m really happy to see that they’re making efforts to prioritize making it enjoyable for the youth because it’s tougher, it’s tougher nowadays to be, you know, a Muslim in this day and age,” Saleh said.