MONTREAL – Celebrating the rich diversity of Canadian Muslim community, a Montreal museum will be hosting an exhibition next January, which will showcase different artworks by talented Muslim youth who reflect on their identity as Canadian and Muslims.

“These are young people who have quite a lot to say, incredible ideas and quite a lot of creativity,” Peter Flegel from the Michaëlle Jean Foundation told CBC on Sunday, November 20.

“Sometimes [they] are misunderstood, or stigmatized, and sometimes face barriers in terms of achieving their aspirations.”

Montreal Museum of Fine Arts will host a special exhibition for talented Muslim youth next January, 2017.

The exhibition, titled Art of Inclusion, is the first exhibit of its kind in Canada.

Close to 50 young Muslims from across Quebec, aged 15 to 30, submitted art projects last summer, exploring their identity and their connection or disconnection to Quebec and Canada.

Marilyn Lajeunesse, the educational programs officer for the museum, was on the jury that selected the finalists. She says they looked for unique, high-quality art.

In the end, nine of the 10 winners ended up being female.

“It’s a very unique opportunity for the millennials of Muslim faith to make their voices heard,” says Fo Niemi, from the Center for Research-Action on Race Relations.

Niemi says each artwork projects an important social message about who each Muslim Canadian is, and how they see the world around them.

Wurood Habib is one of the artists who will exhibit their work next year.

Putting prayer at the focus of her life, finding a suitable place was hard for the young Muslim who was busy with school, work and an internship underway.

“You’re often faced with having to pray where you work, where you study, it’s just part of your daily routine,” says Habib.

“So, I just wanted to showcase the little places that I found, that are somewhat private, so I could pray five minutes.”

Habib created a collection of photos, called Prayer in a Pinch, of different locations in Montreal where she prays.

The Crown, another artwork, is an acrylic and oil painting by Zahraa Sbaiti.

The self-portrait reflects Sbaiti’s sense of identity as a Quebecer, and as a woman who wears the veil.

Mercedeh Baroque created a short film called Daughters of the Believers which includes Baroque and several of her female Muslim friends, who associate with the same punk movement, and are all struggling with their identities.

“The Taqwacore movement [is] a combination of punk and Islam,” says Baroque.

“Those were two parts of my identity that I wanted to bring together, and showcase how this plays into the greater struggle that Muslim women have, in trying to find their path in this society.” 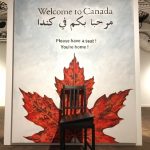 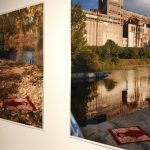 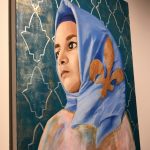 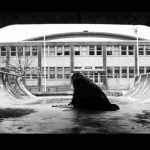 The exhibit is attracting attention internationally, from museums in France and the US, that are planning similar projects.

Members from museums in Lyon, Marseille, Toulouse and New York will be coming to Montreal for Human Rights Day on Dec. 10, to take part in a forum on the integration of Muslim youth into Quebec and Canadian society.

“We are witnessing an upsurge of hate and divisive rhetoric,” said Peter Flegel.

“This [exhibit] really shows that the arts can provide a really safe space and opportunity, to break down the divisions, come together, build bridges and really work to improving our society.”