WATERFORD, Michigan – A local Lutheran church in Waterford, Michigan, has hosted an event aimed at bridging gaps in the society, introducing true Islam to the people, and correcting misconceptions about hijab.

The goal of the program was for attendees to leave “with some new learning and new insight, and maybe some new connection that they didn’t have before, that can continue to be built on,” John Negele, a member of the Waterford Refugee Alliance and pastor of the Christ Lutheran Church, told Detroit Free Press.

Negele was speaking during the Building Bridges: Getting To Know Our Muslim Neighbors event hosted Sunday by The Waterford Refugee Welcome Alliance and held at the Christ Lutheran Church in Waterford.

The event hosted discussions intended to break down barriers and spread understanding of Islam.

“One of the first steps that are needed to build bridges — whether it’s between two people or two communities — is to get to know one another. And that’s what we are here to do today,” Negele said.

The event began with members of the Islamic Networks Group explaining the history of Islam, the beliefs, and practices of Muslims and common misconceptions many Americans may have about the religion and its followers.

Islamic Networks Group speaker Amin Varis explained to the audience that Islam, as an Abrahamic faith, shared many similarities with Judaism and Christianity.

Sameena Zahoor, a family physician from Canton, described her experience in wearing the hijab during her study and work.

“Yes, my experience being a Muslim woman has a lot to do with me wearing a headscarf,” Zahoor said.

“No, I don’t think I’m a better Muslim because I cover — versus a person who does not cover. Yes, I do have hair underneath (my hijab). No, I don’t wear it when I go home, sleep in it or shower in it. Yes, it makes me feel hot and sweaty when I wear it in the summer. No, I was not forced to wear it and no I am not oppressed.” 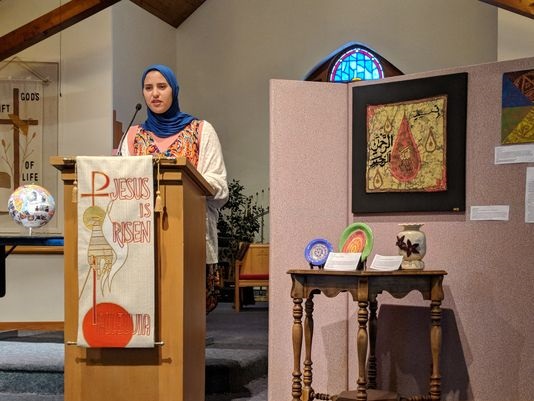 Zahoor, who is also an Islamic Networks Group speaker, said the nonprofit’s purpose is to “dispel myths and misunderstandings of Islam and to get people to understand that the struggle of Muslims is not much different than the struggles of other minority groups.”

“Being able to allow others to ask questions can open conversation that may change people’s hearts,” she added.

“We are not much different. Our ideas, our goals and what we want for each other is very similar to those of (non-Muslims). We are all on the same team.”

Urging people to ask questions about Islam, Mayar Zamzam, a junior at the International Academy Bloomfield Hills and a youth member of the Islamic Networks Group, said many people don’t understand why some Muslim women wear a hijab.

“I wear the hijab because my religion provides me the opportunity to be modest about my looks and outspoken about my personality,” she said.

Attendance praised the event for correcting many misconceptions they held about Islam and Muslims.

“There are a lot of misconceptions of Islam and we need to address them. We need to get smart,” Waterford resident Al Kuehm, 70, said.

“I wish we had something like this every month.”

Negele, the pastor, said Mahatma Gandhi was once quoted saying “The only problem with Christianity is Christians” after visiting a church.