LITTLE ROCK, Arkansas – A mental illness can be a frustrating factor that ruins the life of the patient and his/her family.

However, in light of the Islamic concept of ‘test from Allah’ or ‘ibtilaa’, a Pakistani Muslim family was inspired by their schizophrenic mother to create a charity initiative that helps others with mental diseases, PBS reported on October 9.

Seema Ahmed was a Pakistani Muslim artist and a mother of three girls who lived in Arkansas, the US. Unfortunately, she struggled with schizophrenia and was often detached till she passed away in 2012.

“We didn’t tell anybody about our mother’s mental illness. We feared the stigma and community reaction. We rarely invited people over,” Naureen Ahmed, one of Seema’s daughters recalled.

“The habit carried over into adulthood when even inviting our in-laws over for visits would evoke anxiety. When someone is mentally ill, you make changes to your behavior to accommodate, and those things can carry on to you, and then to your children,” she continued.

Based on their experience with their mother, Naureen planned with her sisters, Sharmeen Qureshi and Mehreen Siddiqui, to create ‘SEEMA Organization’ to give people struggling with mental illness and their family members an avenue for support.

The organization gives family members of the mentally ill the community and space for open conversation that her family didn’t have years ago, Naureen said. “We have to stop making people feel ashamed.”

Not only that, but SEEMA is even a sub-group of MUHSEN (Muslims Understanding & Helping Special Education Needs), a nonprofit organization based in Naperville, Illinois, dedicated to creating a better understanding of disabilities in the Muslim American community. 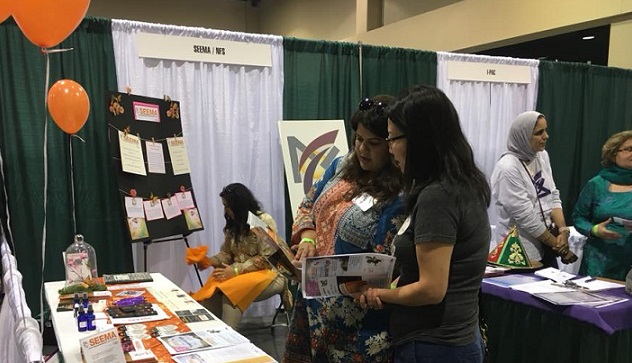 It was officially launched in January 2018 and now has chapters in Chicago and Atlanta, hosting support groups with licensed therapists at community centers and mosques.

To help more patients and families, the three Muslim sisters created a four-step guide on SEEMA website that describes how people can create a SEEMA chapter in their own community.

SEEMA is open to both Muslims and non-Muslims. But mental health resources that are attuned to culture may help address a gap in specialized care for a diverse population.

One of the specialized contributors to SEEMA is Sameera Ahmed, director of the Family and Youth Institute.

“There is no monolithic Muslim culture. But, Many Muslims across different ethnicities, share common existential beliefs about the role of Allah, morality, and emotional health that are distinct from other religious traditions,” she said.

Jessica Yasin, a Muslim woman, and mother of three attended one of SEEMA’s support groups. It was there that Yasin, who was recently diagnosed with severe depression, said she first came to terms with her own mental illness.

“For the first time ever, I didn’t feel alone anymore. I met people I knew, that my family knew, and I realized that people like me are hiding this because of the stigma.”