A number of organizations have started to provide culturally sensitive mental-health services designed specifically for Muslims in Canada, The Globe and Mail reported.

In North Toronto, Khalil Center opened in March with a slogan that says ‘where the Mind & Spirit meet’.

“With around 50% of Canada’s one million Muslims living in Ontario, Toronto seemed like a natural fit. Muslims find many barriers to treatment, including feelings of shame and stigma, religious and language barriers, not knowing where to turn and the cost of treatment,” explained Dr. Hooman Keshavarzi, the founder and executive director of Khalil Center, headquartered in Chicago, the USA.

The center declares that its doors are open to everyone regardless of faith where it offers counseling and therapy tailored specifically to Muslims.

The non-profit organization operates clinics in seven American cities, but this is the first expansion into Canada.

On the same track, the students of McMaster University kicked off last month a “Let’s De-stigmatize Mental Health” campaign, which will host workshops and invite mental-health professionals to give monthly lectures at the Hamilton Mountain Mosque.

In addition to these efforts, Naseeha Mental Health, a confidential telephone helpline for young Muslims, based in Mississauga, recently expanded its services and launched a program at Ontario Universities to facilitate discussion about mental health.

“Offering culturally specific mental-health services is important because some Muslims want to use their faith as part of their overall treatment plan,” said Huma Saeedi, a registered psychotherapist and outreach manager at Naseeha Mental Health.

“We have clients who aren’t Muslim but they come from a Muslim country and they want their therapist to understand their cultural context.”

“There is a growing ecosystem of support and we hope certain mental-health organizations become household names for the Muslim community,” says Amjad Tarsin, the Chaplain at the University of Toronto.

Psychologists and psychiatrists agree that there’s a lack of information out there among the Muslim community. The public has to know that mental illness has nothing to do with lack of faith.

“Spiritual healing and medical treatment have to go hand-in-hand because none of them can compensate the absence of the other,” said Amal Mohamoud, 32, a Muslim woman from North York who watched her mother struggle with depression for eight years, often attributing her symptoms to the ‘evil eye’ till she committed suicide. 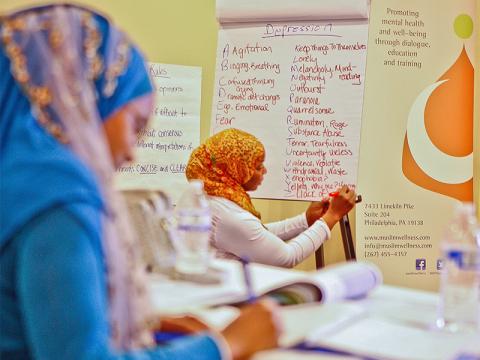 According to the World Health Organization (WHO), depressive disorders are the fourth leading cause of ill health and disability amongst adults worldwide.

By 2020, it is expected that mental health disorders will represent the world’s largest health problem (Duckworth p.2).

All over the world, many Muslims are reluctant to seek out mental health professionals because of the stigma attached to mental illness or because they fear that a Western-trained therapist will not understand their culture or religion.

Earlier in 2016, a group of Ottawa Muslim mental health workers and community advocates held a conference to help those suffering in silence.