CHICAGO – The recent elections have drawn upon deepest fears of immigrant groups nationwide, with the small but growing Muslim community fearfully anticipating Trump administration as one that threatens their security and peace of mind.

Overcoming the shock of Trump’s election, Muslims were focusing on strategic efforts to combat the negative stereotypes and to draw on the efforts of a united Muslim, faith-based, and minority minded front.

Addressing a huge audience in the annual MAS-ICNA convention in Chicago, Dalia Mogahed, a leading American Muslim figure, expressed how she was “shocked by the results and was incredibly devastated”.

However, she affirmed that this is “what Allah has chosen for us and our community”, insisting that the Muslim community must “channel those emotions into action and motion”.

She reiterated the fact that the biggest strategy begins at home, and how Muslims are organized as a community, as an internal “spiritual home” first and foremost, before strategizing politically.

Mogahed referred to the political climate that surrounded Muslims, as the “psychological warfare” that occurred to demonize and to diminish the humanity of Muslims in America.

She stated that the forces of Islamophobia are so heavily organized, insisting on the rhetoric that, many Muslims should abide closely to the values and the distinguished territory of social norms of the United States, and not to be themselves deep down.

“To make sure we feel like grateful guests in our own country,” she added.

Furthermore, she languished on the fact that Islamophobia targets Muslim children first and foremost, so that they can heavily doubt their own identities, urging parents to closely “guard the hearts and minds” of these young children, and even teenagers that are receiving this type of rhetoric. 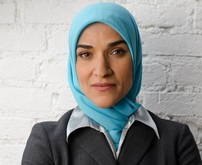 Mogahed lamented the fact that non-Muslims were also becoming a secondary target of this internalized Islamophobia, describing the political discourse in the country at this very moment as the worst it has been in living memory.

“This toxic wasteland. That is the political discourse of this country right now. You can internalize Islamophobia just like anyone else,” she said.

She also stressed the fact that domestic abuse, divorces and other internal factors play a large role to internal community strife and spike up when political stresses tend to simmer.

Many cases of divorces had shot up in the wake up of 9/11 attacks. A same worrying trend was noticed after Trump was elected as many were collectively stressed and upset.

Mogahed believes that many different efforts to unite the American Muslim community starts with mosques.

Ultimately, she believes the demise of hate rhetoric will come about in legal channels, through IRS audits and other non-for-profit legal statuses.

On a social level, many feel alienated from such spaces, and this creates a void when it comes to engaging with the Muslim community.

She believes “Arab dominated and Desi dominated mosques” are committing the biggest red flags when it comes to intra-Muslim strife. She added that “women are alienated” from participating in mosques as a whole.

Mogahed concluded by saying that the political climate is “a gift” which Muslims should use as a wakeup call to be able to address the issues that have been plaguing them for a very long time.

Multiple efforts that have been kept dormant, due to political differences, should be brought to the forefront to be spoken about, discussed and ultimately implemented immediately.

Moreover, she summarized her message that the start of the unification of the Muslim front starts at home, and must involve Muslims speaking to other Muslims first and foremost. Alienating the Black and Hispanic community will do no one any favors and “it alienates our natural allies”.

The political environment that laid bare before Muslims must be addressed, and it must be done swiftly, or else the demise of the nascent Muslim American community will be coming very shortly in the near future.