American Muslim doctor Ayaz Virji had a well-paying position at a Pennsylvania hospital when he decided to uproot his family in 2013 and move to Dawson, a town with about 1,500 residents in white, rural Minnesota, NPR reported.

Virji says he “had the BMWs, the nice house, but it wasn’t enough for me, I wanted to do more.” “So I felt like I should do something about that. And it was back to the idea: If not me, then who?”

“People there are kind, you know, many of them are far better than I am as a person.”

Then came the 2016 election when the majority of Dawson residents voted for President Trump, including Virji’s patients.

With rising misconceptions about Islam and Muslims, fueled by political atmosphere, Virji was invited by Rev. Mandy France, then an intern at a local Lutheran church, to give a talk titled “Love Thy Neighbor” in a school auditorium.

“When we did our first talk, people protested,” Virji said. “They said Muslims shouldn’t be allowed to speak publicly. And I’m like, you guys know me. I’m the doctor. I treat you guys.” 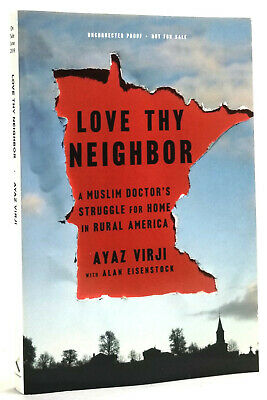 Ever since, he’s given more than 25 lectures. He and France even addressed the Evangelical Lutheran Church in America’s national celebration of the 500th anniversary of the Protestant Reformation in 2017.

Now Virji has turned his talk into a book titled “Love Thy Neighbor: A Muslim Doctor’s Struggle for Home in Rural America.”

Islam encourages Muslims to treat their neighbors in a gentle way that reflects the true and genuine spirit of Islam as exemplified in its tolerant aspect especially with people of other faiths.

It makes no difference whether the neighbors are Muslim or non-Muslim.

Situated in the north midwest area of the US, Minnesota is the 12th largest state in the country in terms of pure surface area. In terms of population, it ranks 21st, with an estimated population of 5.68 million in 2019.