The first-of-its-kind center in the United States, IslamInSpanish is dedicated to providing Islamic education and information to Spanish-speaking Muslims and non-Muslims alike.

Juan Pablo Osorio is a recent convert who just completed his first Ramadan and joined others at the `Eid Al-Fitr prayer, which was led by the center’s founder and CEO Jaime “Mujahid” Fletcher.

“It was a beautiful experience,” Osorio told AboutIslam.net.

“To be there and to see such a diversity of people from several different continents – Africans, Asians, Middle Easterners, Europeans and Latinos – was humbling, and to hear the message was very touching.”

This gathering of people representing many races and ethnicities is one of the focuses of IslamInSpanish, Fletcher said.

Of course, a large focus is to reach Spanish-speaking Muslims and non-Muslims. Fletcher said this is especially important in a city like Houston, which is approximately 44 percent Latino.

“This place is very welcoming to anyone in society and that’s how we wanted to make it,” Fletcher said, explaining that much of the design is modeled after the Great Mosque of Cordoba in Spain.

“We wanted it to be a place where when people come they feel instantly comfortable, and I think we’ve been successful because no one has ever come and felt alienated or isolated or felt that it’s just a Latino thing.” 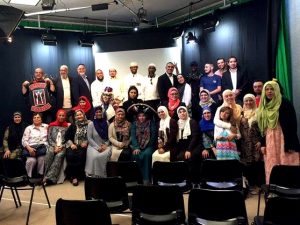 It seems to be working. Since opening its doors on January 30, IslamInSpanish and those who helped build it have witnessed nearly 30 people come into the fold of Islam.

Fletcher, who is from Colombia and became Muslim in 2001, said the center’s mission is successful for many reasons but particularly because of its efforts to live stream its educational classes, prayers, and weekly sermons throughout South America.

“We stream everything live and the khutba is delivered with 20 minutes in Spanish and 10 minutes in English, so we serve as a satellite station that’s sharing all of this information,” he said.

“We find that so many people are following us, as much as 120,000 people from as far away as New Zealand and Japan. We really capitalize on the use of media.”

Osorio, a veteran of the US Marine Corp, said the live streaming in Spanish has been particularly important to him in his goals to educate his non-Muslim and non-English-speaking relatives about his adopted faith.

“It’s something very remarkable to be able to send the link for the khutba to my family so they can understand a bit better what I’m involved with,” Osorio said.

“That means a lot of me to send it to my grandmother who doesn’t speak English. She sees the sermons and sees that Islam is not something so foreign and very much like everything she’s known her whole life (in terms of religion). That’s very beautiful, and I feel very blessed.” 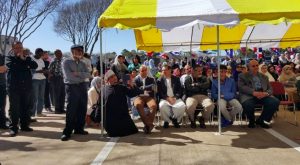 The idea for IslamInSpanish started a few years ago with one compact disc called The Religion of Truth that Fletcher created with his father, who is also a Muslim revert.

The CD was in Spanish and Fletcher gave it to his wife’s aunt who was suffering from cancer. Despite her initial resistance to Islam, the aunt listened to the CD and eventually converted before her death. Fletcher then realized how important Spanish-language Islamic material was.

“We began distributing the CD and saw people wanting to know more,” he told AboutIslam.net.

“People were embracing Islam and that led to us holding classes in various mosques, and people started to call us to speak at churches and universities. That led to more production of audio (media) and then a television show on a public access channel.”

Motivated and inspired by how many people were interested, Fletcher soon realized the need for a central meeting location. When decided to build the center he reached out to friends in Dallas for funding.

Now that IslamInSpanish Centro Islamico is up and running, Fletcher and Osorio – who works in production at the center – hope it serves as model for similar facilities across the country.

Fletcher said it is more important now than ever for Muslims to control their own narrative and to spread a positive message and image of Islam to as many people as possible.

“We must lead, direct and mold the environment,” he said.