TORONTO – As Canadian Muslims enjoyed the events of the annual MuslimFest in Mississauga, their kids were beaming with excitement in a  workshop  where  they explored their Muslim superheroes.

“The thing with the Muslim community is, it’s depicted so many times in the comic books where it’s always a negative point,” Adonis Howard, from Ink Pallette Productions, told Toronto Star on Sunday, August 28.

“Now they have some great characters (who are) Muslims.”

MuslimFest, the largest Muslim festival in North America, returned to Mississauga Celebration Square in suburban Toronto last Saturday for its twelfth year with over 25,000 visitors expected to take part in the festivities.

As part of the event, Howard conducted a workshop for Muslim youth on drawing superheroes and Pokemon figures, along with their Muslim superheroes.

Howard and fellow artists showed more than 20 kids, aged about 7 to 13, including numerous girls, how to draw characters such as Batman and Pokemon. 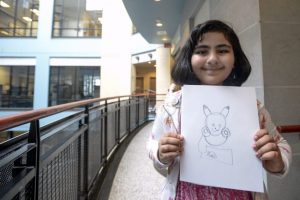 Momina Khawaja, 8, shows off her favourite drawing of a Pokemon. (Andrew Lahodynskyj/Toronto Star)

They also learned about Muslim superhero Dust, an Afghani heroine with the ability to turn her body into sand, and Ms. Marvel, also known as Kamala Khan, a Pakistani American with shape-shifting abilities.

“I mean, for the longest time it’s been Batman, Superman, Wonder Woman, all these great characters, but it’s always the one culture,” said Howard.

The session helped Howard to build kids’ self-esteem and confidence.

“I don’t want to hear the words ‘I can’t draw,’ because back in the day I couldn’t draw either,” said Howard, who started his art career when he was 26.

“Out of eight cousins I was the worst artist in my family. All my cousins could draw, and I couldn’t draw a cat.”

Nine-year-old Momina Khawaja says she “absolutely loved” the workshop and is planning on continuing to practise drawing.

“It was amazing! We all got to see so much figures and awesome superheroes that we loved, and Pokemon,” said Khawaja.

“I had company helping me, I had people looking at it saying, ‘Oh wow, you did such a good job.’ It was a beautiful event!”