KANSAS – Wearing a rainbow of hijabs, Kansas Muslim young scouts are trying their best to make America better and always great, at a time when Supreme Court hears arguments over the controversial travel ban.

“I didn’t really have that much confidence in myself before. When I joined Girl Scouts I was really shy. I am also really shy right now,” Zainab Attar, 9, told The Kansas City Star.

“But I talk more than I did before, here and in school. And I have more patience. Patience is important.”

“I like my hijab,” she told the paper at a Scout meeting in south Overland Park.

“But one time when I wore my hijab to school people made fun of it.”

The young girl puts on hijab when she goes to mosque and during prayers, but very rarely in public. 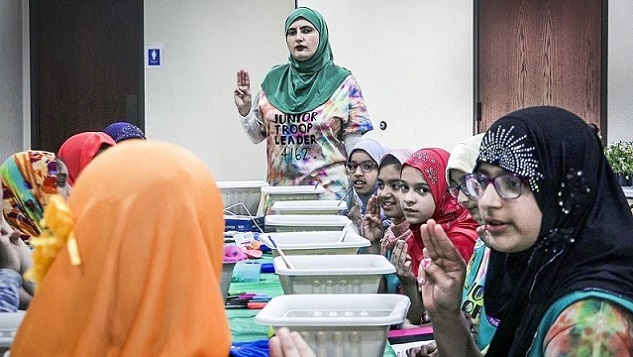 Troop leader Saima Imtiaz started the Overland Park troop after years of taking her oldest daughter over to a Muslim troop in Olathe.

When her younger daughter, Syeda Khadijah, was old enough to join, Saima realized the Muslim community had grown enough to fill another troop. Now she has 15 girls.

She sees that a Muslim troop strengthens the girls so they can teach others about themselves and learn about others as well.

“We share the same values as all Girl Scouts troops,” Saima says.

“But this is good for them because they all know what the other one is going through, and if they have a problem we can work together to resolve things. They are gaining so much confidence.”

Her oldest daughter, Syeda Mahnoor, 16, has seen what the troop can do.

“We strive to improve ourselves, to work together and help people around us understand who we are. We are not different. We are not bad people,” she says.

“People don’t know until you show them. A lot of people have never met a Muslim, and we are busting down stereotypes by going out in the community and talking to people. We are loving people, and we teach the girls to love themselves for who they are and love themselves, even when they are around people who are not like them, so they aren’t affected by hate.”

Starting in 1907, the Scout movement was popular in the Arab world and out of the 40 million Scouts worldwide, 28 million are Muslim, he noted.