TORONTO – Islamic Heritage Month was celebrated on Wednesday evening at the Ontario Parliament with a reception hosted by the province’s official opposition leader, Andrea Horwath and the NDP Caucus.

“I am thrilled that we are able to be here marking the third official Islamic Heritage Month in Ontario,” said MPP Doly Begum in her welcome remarks.

“The Ontario NDP Caucus under the leadership of Andrea Horwath and Teresa Armstrong pushed to make Islamic Heritage Month a law in 2016. I am proud to say that we were successful.”

“I do want to recognize the challenges that the Muslim community continues to face and much work needs to be done to address Islamophobia,” added Begum.

“I think activities during this month will be able to create that dialogue to bridge the gap to overcome Islamophobia.”

“As a newly elected Muslim woman and the first Bangladeshi to be elected in North America, I am inspired to be joined by community leaders who I have admired for many years and also the next generation of voices in this room who will continue to do the great work done by those before them.”

Religious and community leaders attended the reception and artists whose work was on display joined them.

NDP Leader Andrea Howarth commended the Muslim communities for their contributions to the province of Ontario.

“Ontario is a province that is made great because of our diversity. It is absolutely our greatest strength and embracing that strength is critical to the future of our province,” said Andrea Howarth in her remarks to the gathering.

“The Muslim communities have played an important role for decades – you have shaped our communities and you have helped us to prosper and grow together as a province,” she added.  “By celebrating Islamic Heritage Month together we help to educate all Ontarians about this vibrant part of our province and of our society.” 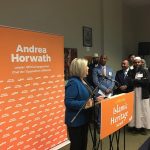 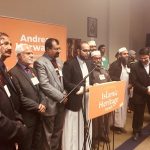 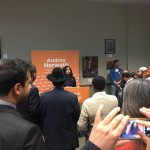 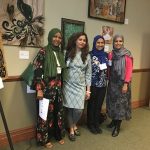 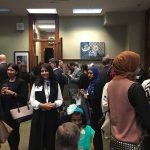 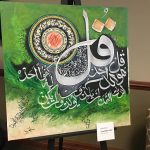 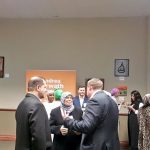 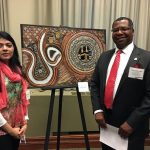 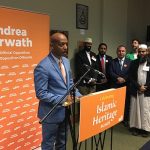 NDP MPP Faisal Hassan marked the beginning of Islamic Heritage month in the legislature on Monday, speaking about the vast contributions the Muslim community and inviting people of all backgrounds to celebrate together.

“October is the month we celebrate Islamic heritage in Ontario. The Muslim community has been present in Ontario and in Canada since the country’s founding in 1867. We celebrate together to inform, to educate and to share with our fellow Canadians the rich Muslim heritage and contribution to society,” said MPP Hassan in his statement.

“These are contributions in science, humanities, medicine, astronomy, architecture, history and other disciplines that have greatly benefited human progress.

“It is the month we recognize the important contributions that Muslims make in Ontario as part of the vibrant social, economic, political and cultural fabric of our province,” he added.

“Islamic Heritage Month brings people from all backgrounds together and provides positive vibes, especially since there are so many misconceptions in society about Islam. Muslims have been contributing to all aspects of Ontario’s prosperity and diverse heritage for generations,” added Hassan.

“Islamic Heritage Month is about creating positive understanding for the Muslim community and sharing this with our neighbors. I encourage every member to take part in the events in your area.”

Throughout the country, Islamic Centers, mosques, and school boards are holding exhibitions, lectures, workshops and film screenings to mark the month.