The Islamic Center of Peoria
aaa

With plenty of food, a bounce house for kids, informational booths and tours inside the center, Muslims in Peoria, Illinois were fully prepared for their guests on Saturday in a special event dubbed “Lunch with Your Neighbors”,  Journal Star reported.

“It’s just amazing that people get to see us in our daily routine,” said Abdul Khan, a volunteer at the Islamic Center of Peoria. “In our natural habitat, if you will.”

Opening their doors to neighbors, Burhan Hamdan, the spiritual leader of the Islamic center, said he was ready for all questions.

“Even the most hostile question you can think of, I’ll be more than glad to sit down with them,” he said. 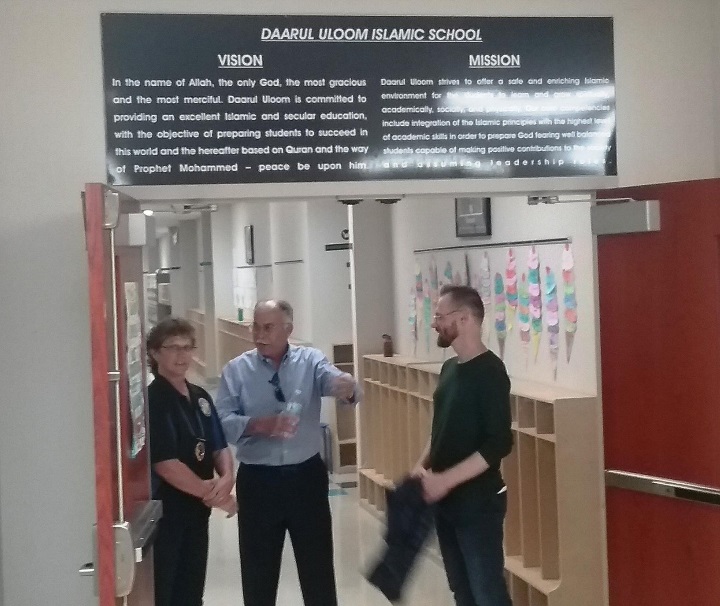 Tours inside the school in the Islamic Center of Peoria

Hamdan, a Palestinian from Kuwait, believes that these events are the best answer to blanket judgments and stereotypes.

“It’s a way to show the community, ‘Hey, we are Muslims, this is what we do, this is our house of worship,’” Hamdan said.

“I am a true believer that the people of that faith are the best equipped to answer any questions. I am tired of people answering on my behalf. I’m Muslim. Let me answer the questions, and ask me any questions.”

April Privett, a Lutheran from Morton, is one of the attendants who toured the Islamic center for the first time.

“It’s good to experience each other’s cultures, right?” Privett said. “Our lives are richer. … I just think it’s good to be around everyone, not just people the same as you.”

Muslims across the world usually open the doors of their mosques to guests to enable them to have a glimpse of their faith and proper understanding of its teachings.

For example, Visit My Mosque Day is held annually in a number of countries including Australia, the United Kingdom, Norway, and France.

In Canada, the first-ever Visit My Mosque Day took place in October 2017.