HOUSTON- Disasters are times of disruption, trauma, even horror. But for Rania and Sara, Hurricane Harvey brought moments of great sisterly love and support.

“For the first time since I had moved to Houston in 2010, there seemed to be some uneasy feeling about this storm,” Rania Saad told AboutIslam.net.

“The odds were greater, they said, that this hurricane had the potential of hitting hard since we hadn’t had a bad one since Rita, 2008. Dark clouds had started to form and the sky looked heavy.”

As Raina and her two kids anticipated Hurricane Harvey in their 24th-floor flat, her friend Sara was digging trenches and clearing paths for the water to drain from her house yard into the common area.

“I’ve lived in Houston Texas since 2000 when I moved here to work as an engineer in the oil and gas industry,” Sara told AboutIslam.net.

“In the past 17 years, there have been many storms and floods but Harvey was the most devastating to the largest number of people. I live in a neighborhood about 300 to 400 yards from the Buffalo Bayou where excess floodwaters from the two large reservoirs were drained out to sea.”

Both friends returned to Houston two days before the storm. As all stores were nearly empty, Sara went shopping to bring enough stuff to Rania and her little kids.

“On Friday, one of the stores luckily had just brought in some water, so I bought enough for 5 days in case the water supply became undrinkable for Rania, the kids and I, plus bread, snacks, etc.,” Sara recalled.

“The rain was getting heavy and so I left Friday night from Rania’s and went to my home to dig trenches to avoid flooding from the yard into my house.

“I left a cell phone for her so she would have access in case her landline went out and the receiver for her landline was not working so I bought a handset for that in one of the forays into shops that had big sections cleared of merchandise.  During the storm and heavy rains, we stayed in close contact.”

When the hurricane brought lots of rain, Sara’s house remained relatively safe, with only one leak in the roof and some seepage in another room.

“Once the reservoirs started releasing down the Buffalo Bayou, the entire neighborhood between my street and the both sides of the bayou were heavily flooded. The water level was very high and accesses quickly blocked for vehicles due to high water,” Sara said. 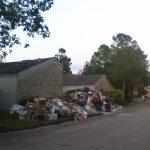 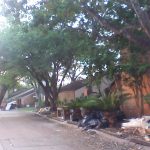 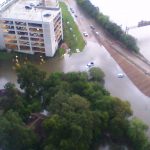 As her house is 3-4 ft above the street level, Sara invited all her neighbors to bring in their valuables and stay with her.

“Once the reservoirs started to be emptied the water rose and neighbors were watching out for neighbors and the folks across the street moved their treasured items to my house and came and stayed with me,” Sara said.

Overcoming the disaster, both women reached out with donations to the evacuees at the George Convention Center.

Rania and Sara’s efforts were only part of the huge relief work done by Islamic charities after Hurricane Harvey devastated Texas.

Immediately after the flooding, the Islamic Circle of North America (ICNA) launched a new relief campaign to help those affected by Hurricane Harvey, urging US Muslims to assist their fellow Americans in this time of need and distress.

Muslims from other parts of Texas have shifted into gear as well. In Dallas, more than 300 volunteers answered the call from Islamic Relief when the nonprofit organization offered volunteer training.

Also, several Houston-area mosques reported fellow Muslims from areas like San Antonio and Austin have landed in Houston to help, soliciting, collecting and transporting the donations themselves.

After the end of the disaster, the Islamic Relief USA was nominated one of the best charities assisting in rebuilding from hurricane Harvey’s aftermath by Charity Navigator, a nonprofit that has independently rated over 8,000 charities.