HOUSTON – The Muslim faithful, fresh from their nightly taraweeh prayers, flocked to the tables heaped with homemade treats. The wide variety of cupcakes, cookies and brownies – all tempting after long days of fasting and hours stood in prayer – practically begged to be bought.

Charity or not, the sweets were a welcome sight.

But charity it was as the bake sale was part of a Ramadan charity push by Helping Hand for Relief and Development, a nationwide organization founded in 2005, based on Muslims’ duty to offer alms during our most holy month.

In doing so, the organization, which benefits Muslims and non-Muslims alike, is helping people to fulfill their religious duties as instructed by Allah in the Qur’an.

“They feed with food–despite their own desire for it– the indigent, and the orphan and the captive (saying): ‘We feed you purely for the sake of God. We desire no reward from you, nor thankfulness.” – Surah al-Insan 8-9.

Indeed the Prophet Muhammad stressed the importance of offering zakat in Ramadan.

“The best charity is that given in Ramadan.” (Tirmidhi)

The bake sale, staged at River Oaks Mosque in Houston, Texas, directly benefited orphans in Kenya and in Burma, according to Afshan Mohammed, who worked to spearhead the effort.

“It’s a fun thing to do, and it’s going well,” she told AboutIslam.net. “After long prayers people do get hungry.”

So far, Mohammed and her group of about 10 other volunteers have raised approximately $2,500 at three Houston-area mosques.

The money, which Mohammed will donate to orphans through Helping Hand, pays for a year sponsorship of one child at a cost of $365 per year. 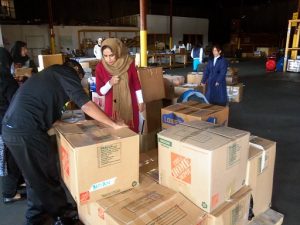 “We chose those two countries because they have been neglected lately in terms of media coverage,” he said, explaining that less media focus means a decrease in donated financial aid sent to the country.

“Even now after the large (2010) earthquake in Haiti there are still many orphans and many problems those people are facing. In Kenya a lot of the native people are going through rough times as well as the Somali refugees there,” he told AboutIslam.net.

Mohamed said he was contacted by Mohammed about the bake sale – and it’s not the first time.

“This same group did a bake sale last year for the people of Burma and they raised about $7,000,” he said.

“They approached us about it and coordinated it among themselves.”

Mohammed said she’s happy to organize the charity efforts and let other volunteers organize bake sales at their individual mosques.

“They do all the baking, set up the tables and do the selling,” she said. “I’m not even there because I want them to get their reward (with Allah).”

In addition to the Houston-area charity pushes, Helping Hand for Relief and Development offers Muslims several causes in which to contribute during Ramadan.

People can choose to help those impacted by the recent earthquakes in Ecuador and Nepal; the wildfires in Alberta, Canada, and the ongoing humanitarian refugee crisis in Syria and in Burma. Those interested in donating directly can log on to www.hhrd.org or call Mohamed directly at 713-517-8339.

Helping Hand is one of several similar groups throughout the United States. For example, Muslims looking to make easy online donations can do so through Islamic Relief USA at www.irusa.org or at United Muslim Relief at umrelief.org.