MINNESOTA – An American Muslim teen made history on Sunday, November 27, by competing at Miss Minnesota competition in her traditional dress and modest swimwear, reaching the semi-finals of the beauty pageant.

Donning burkini, her swimsuit stood in sharp contrast with the other 44 women, most of whom donned revealing bikinis during the pageant’s signature swimwear segment.

Aden added that she entered the competition at Burnsville’s Ames Center to break barriers for Muslim women and counter the prevalent notion that they are oppressed.

She hoped to be a role model for girls who felt that wearing the hijab might hold them back.

“I just want to go on as myself,” said Aden, a freshman at St. Cloud State University.

“When you have a lot of women in our state that do wear the hijab, we should be able to see that everywhere.” 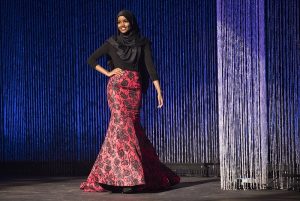 Aden’s appearance on the stage was met by a huge cheer from a group of friends and family, who beamed with pride for how Aden represented her community.

Aden’s mother, Rukia, who moved the family to Minnesota from a Kenyan refugee camp 12 years ago, when Aden was 7, cheered her young girl.

“This was something new to me. I’m very happy to live in the United States where people are free and can wear what they want.”

“It was her choice and I’m happy with what she chose,” Rukia Aden said.

Seeing her participation as breaking stereotypes about Muslims, Aden said she received thank-you notes from parents and young girls who have been bullied.

“That’s made me so proud to be a part of this,” she said.

“Just give it a try. You might not win, but maybe the fifth, sixth girl will win. Don’t let anything get in the way.”