BOSTON – When Rahaf Khatib, the first hijabi Muslim athlete to appear on cover of a fitness magazine, races in April’s Boston marathon, she will be making several records.

In this race, the 33-year-old will be participating as a member of a special all-female team to honor the 50th anniversary of Katherine Switzer’s 1967 race, the first time a woman ran in the Boston Marathon as a numbered entrant, according to the Boston Athletic Association, which organizes the race.

“Being on a team of all-female runners is pretty significant, and I feel like it speaks a lot about where [women] are and how far we’ve come,” Khatib told NBC News.

“But I also want to prove people wrong, [and show them that] covered Muslim women can and do run marathons. I want to shatter those stereotypes. It’s my way of giving back to running and to humanity as a whole.”

“I have wanted to run Boston since the moment I realized what a big deal it is for runners,” Khatib told NBC News.

“I always said that I would love to run the Boston Marathon and fundraise and my efforts would go directly to the refugees, but I never thought anything would materialize. When I got into Boston this year, I thought, ‘it was meant to be.'”

Khatib, originally from Damascus, moved to US in the 1980s. She currently resides in Michigan with her husband and three kids.

She was featured on last October edition’s cover of Women’s Running Magazine.

Lisa Shapiro, Hyland’s senior brand manager, told NBC News that Khatib’s accomplishments in running and her role in encouraging greater representation of hijabi athletes, led to her invitation for a spot on the all-female team to commemorate the 50th anniversary of Switzer’s run.

“We wanted to feature the real women who continue to push boundaries and inspire new generations with their accomplishments,” she said.

“As one of the first influential women in the fitness world to run in a hijab, Rahaf certainly fit that bill.” 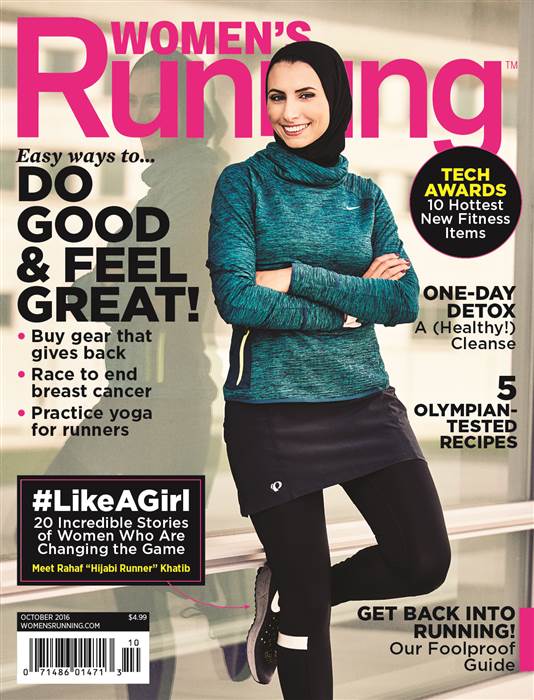 Khatib is also raising money for the Syrian American Rescue Network (SARN), a nonprofit based in her home state of Michigan that helps resettle Syrian refugees.

“I thought to myself, ‘That could’ve easily happened to me in 1983. I could’ve been held back as an infant,'” Khatib said.

“I knew then I had to fundraise.” Four days later, she launched her online fundraising campaign, which has raised more than $11,000.

Founded in 2015, SARN organization works to assist Syrian refugees in the metro Detroit and Ann Arbor areas in adjusting to the logistics of American life with the goal of fostering self-sufficiency, SARN vice president Ayesha Fatima told NBC News.

According to Fatima, SARN is currently helping close to 2,000 refugees, many of whom arrive in the US from refugee camps in Jordan and Turkey.

“We are very excited about Rahaf’s efforts,” she said, “because it’s not just about the money, it’s about raising awareness and advocating.”