A Muslim school volleyball team in Milwaukee, Wisconsin, has been shattering stereotypes, with all students winning games in their hijab and long sleeve suits, Radio Milwaukee reported.

“We are right in the middle of changing culture when it comes to female athletics here at Salam,” said Salam High School Coach Martie Budnowski.

“Salam is just starting to get into the ‘It’s okay to win and we can fight to win’ mentality, which still needs to grow as opposed to ‘we’re just so glad we get to play.’”

Around the world, Muslim women are defying cultural barriers and stereotypes to compete and excel at the highest levels of sports — in football, fencing, weightlifting, basketball, ice hockey and more.

In 2016, 14 Muslim women medaled in the Rio Olympics, including American fencer Ibtihaj Muhammad, the first Muslim woman to represent the United States on the podium.

The Salam School girls is not an exclusion.

Budnowski believes that the high school varsity volleyball team is currently in the works of changing the perception around hijabi Muslim athletes.

This the first season with Coach Budnowski, and with her addition on the team, Salam Stars had a significant victory against Tenor High School with a five-set match. 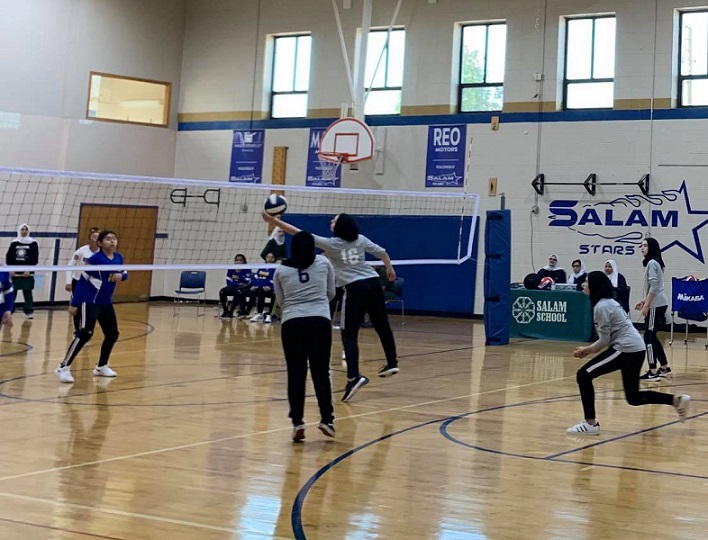 Some students said they sometimes face bias for wearing hijab.

Another student-athlete Phareda Be says that’s not always the case.

“I would go to parks and practice there,” said Phareda Be. “Some girls, I have no idea who they are, they just see me play volleyball and are like, ‘can I join?’ and stuff like that, so I have a positive view when playing volleyball.”

Najma Abdi, student-athlete, says that what one decides to wear shouldn’t be a relevant factor when playing volleyball.

“People don’t understand that there is a difference between my skills and what I represent,” said Abdi.

“I represent Islam and my skills have nothing to do on whether I’m wearing a scarf or not.”