“I am a Muslim,” the shirt worn by all members of the Aces boys basketball team read in white script. “I am a refugee. I am an immigrant. I am an American. I am an Ace,” PA Prep Live reported on February 15.

The t-shirts worn by the team of Lower Merion high school, famously the alma mater of Kobe Bryant, were reportedly designed by a senior on the team.

“People’s lives are bigger than a ball going through a hoop,” said Najja Walker-X, a senior guard who spearheaded the production of the shirts. 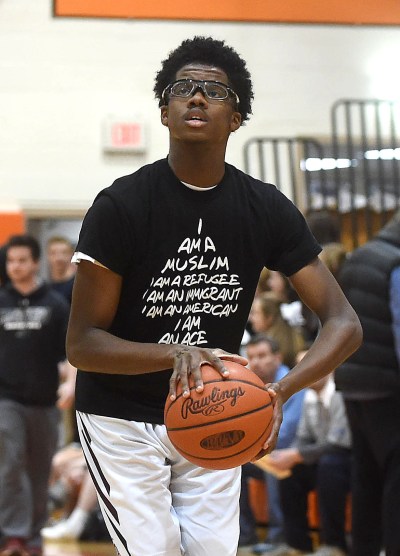 Several players had been sitting during the national anthem before games, and the team made a unified statement by wearing the shirts for a third straight game.

“What we do want to convey, however — as a full team — is that no matter where you come from, no matter who you are, you should be welcomed, respected and heard,” reads a team statement Walker-X crafted in consort with teammates.

“As a team, we believe in fighting for the rights of all — protecting, defending and giving voice to those who feel marginalized, who live in fear and who face injustice.”

“Once we started wearing the shirts like this, everyone can read our message,” senior guard Noah Fennell said.

“Instead of just someone kneeling and (people wondering), ‘why is he kneeling?,’ we can be like, this is our message. And we’re put on a good stage to do that. It’s humbling to be able to support something like this.”