“President Trump in 2017 reflected what white supremacist groups want to see: a country where racism is sanctioned by the highest office, immigrants are given the boot and Muslims banned,” Heidi Beirich, director of the SPLC’s Intelligence Project, told Al-Jazeera.

In the group’s report, SPLC identified 954 hate groups in the US last year, an increase from the 917 it had documented in 2016.

Releasing the report on Wednesday in a conference, the civil rights monitor noted that the number of hate groups has risen 20 percent since 2014.

Today we are releasing our 2017 hate count.

President Trump’s first year in office proved to be just as racially divisive as his campaign.

In 2017 we documented a rise in hate group numbers for a 3rd consecutive year. #YearInHate https://t.co/N8FHKfi4VX

According to the SPLC, 2017 was the third straight year to witness a rise in the number of hate groups. It was also the first year since 2009 that hate groups were documented in all 50 states.

Neo-Nazi groups, which the year before had numbered 99, saw the largest increase, growing by 22 percent and reaching 121 groups across the country.

Neo-Nazi groups were among the more than 600 organizations the SPLC designated as a broader category, which also includes Ku Klux Klan (KKK) chapters, neo-Confederate groups, and others.

Anti-government groups grew from 623 in 2016 to 689 last year, the group explained, adding that 237 of those groups were armed militias.

Anti-Muslim groups rose for the third year in a row. 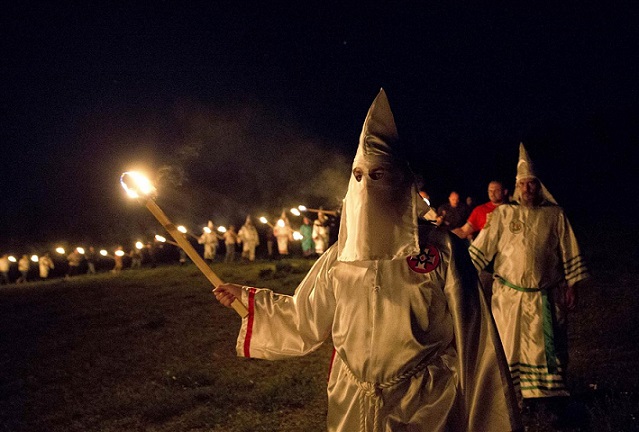 Meanwhile, KKK chapters declined drastically, decreasing from 130 in 2016 to 72 last year, in what Beirich attributed to the growing appeal of the alt-right, a loosely knit coalition of white supremacists, white nationalists, and neo-Nazis who advocate a white ethnostate.

In a recent report, the SPLC documented 100 people killed or injured by affiliates of the alt-right throughout the last four years.

Last month, the Anti-Defamation League published a report that found 18 people were killed by white supremacists in 2017.

“Domestic terrorism committed by white supremacists … continues to be a problem,” Beirich said, alluding to a string of far-right attacks that resulted in deaths last year.

“It’s as if our culture has been infused by these ideas,” Beirich said.