NEW YORK – Despite the hate-mongering and Islamophobic sentiments fueled by Donald Trump, halal food is gaining more popularity across the United States, not only among the fast-growing US Muslim population, but also among adventurous millennial foodies who are embracing it too.

Amanullah describes how halal food has gained popularity over the past year.

When he launched a website to help Americans find halal food, he could only find about 200 places that served it in 1998.

Today, he’s tracking 7,600, and he says halal is making inroads even among people who are wary of Muslims.

At every level of the US food chain, halal already occupies a small but rapidly expanding niche.

In grocery and convenience stores and similar outlets, research firm Nielsen estimates that sales reached $1.9 billion in the 12 months through August, a 15 percent increase from 2012.

Whole Foods Market Inc. is one of the pioneering companies to dedicate special place for halal food.

Last Ramadan, it launched an initial Ramadan campaign which earned it huge criticism for failing to tout other religious holidays.

“People look to Whole Foods to be that trend setter,” he said, “We’re happy to be on that cutting edge and take some risks.”

The halal food industry was spreading in huge international brands including Mondelez International Inc., the global snack giant, deemed a player in predominantly Muslim countries like Indonesia and Saudi Arabia.

The US Nestle, the world’s largest food company, also has 151 halal factories, from Malaysia to Pakistan, and distributes hundreds of certified products across the world.

Wal-Mart features halal products at about 400 of its 4,600 stores, and Kroger carries them only where there’s local demand. 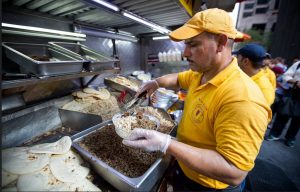 Despite its huge growth in the American market, many use websites on how  to find halal food as guide for who to boycott.

It’s possible that halal could be “held back by the stigma” that some Americans attach to Islam, said Krishnendu Ray, associate professor of food studies at NYU Steinhardt.

“Or, it could eventually be like kosher, which is identified as fresher, more virtuous food.”

Saffron Road is a star performer at Whole Foods, and is also sold at branches of Kroger Co., Safeway Inc. and Giant Food Stores, among more than 12,000 locations.

Halal Guys, which started as a street cart serving meat dishes in New York City are partially credited for the spread of halal food.

They proved so popular that the company plans 300 sit-down restaurants across the US in the next several years.

“Costa Mesa is in a strip-mall plaza, which couldn’t be farther from the corner of 53rd and 6th in midtown Manhattan,” said Andrew Eck, head of marketing.

Recently, about 20 people, a mix of office workers and tourists, waited to order at the original Halal Guys food truck in New York.

“It’s a must spot to eat in New York,” said Alejandro Nova, 30, who was there with a friend visiting from Colombia.

“It has nothing to do with how they treat the animals.”