CHICAGO – The death of two men in Portland for defending Muslim girls, a man ramming his van into Muslim worshippers outside a London mosque and the brutal death of a young teenage Muslim on her way to mosque in Washington DC; all this has spread a gloomy atmosphere in the largest Muslim convention in North America.

“More than any other year, I really hope this convention is one that really brings us all together to feel that sense of unity and belonging.”

Along with these hate crimes, the application of some provision of President Trump’s travel ban, which took effect only one day before the convention kicks off on Friday, was the final blow to American Muslims.

The Convention themed, “Hope and Guidance Through the Qur’an,” brings together both Muslim and interfaith individuals, families, businesses and non-profit organizations for a full schedule of lectures, discussions, debates and entertainment. 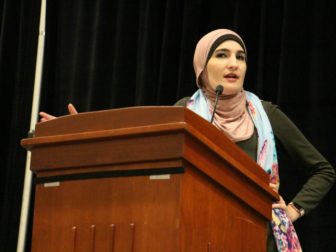 The convention aims to gives Muslims and guests of other faiths opportunities to network, exchange ideas and hear from well-known speakers, according to organizers.

Several thousand people are expected to attend the ISNA Convention over the Fourth of July weekend at the Donald E. Stephens Convention Center outside of Chicago.

Convention speakers included activists, scholars and religious leaders, including Linda Sarsour, one of the co-organizers of the Women’s March, recently named one of TIME’s 100 most influential people, and Abdulrahman Mohamed El-Sayed, a candidate in Michigan governor’s race.

The convention also included non-political events such as a basketball tournament, film festival and bazaar with more than 500 vendors selling everything from modest fashions and halal cosmetics to cuddly dolls reciting Quran passages. 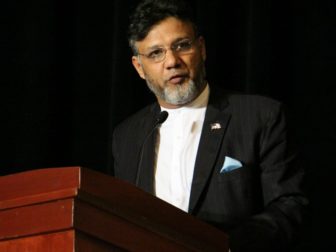 But, they were able to pointed out reasons for optimism.

“Embracing people is also at a rise. Activism is at a rise, as well,” said Mazen Mokhtar, executive director of the Muslim American Society.

“That is a message of hope. It is an opportunity for those who wish to make a change to make that change.”

ISNA President Azhar Azeez pointed to the number of Americans of all faiths who turned out at airports to protest President Trump’s first executive order and to the Women’s March demonstrations around the country.

Among the non-Muslims at the convention was the Rev. Elizabeth Eaton, presiding bishop of the Evangelical Lutheran Church in America, who announced Friday to applause: “Should there ever be a Muslim registry in this country, I humbly request the honor to be the first to sign up.”

Fatima Islam, a 16-year-old from Houston, said Friday she was feeling expectant and hopeful.

“It’s been like a family tradition in which we’d come here every year all together,” she said.

Estimates put the Muslim population in the US at between five and eight million.

ISNA is the largest Muslim umbrella organization in North America.

ISNA’s annual convention dates back to 1963, when the first such event was organized by the predecessor to ISNA, the Muslim Students Association of the United States and Canada.