HOUSTON – This year on `Eid Al-Adha, Muslims around the world offered up a sacrificial lamb, goat, or camel in honor of Abraham’s perfect obedience when Allah called on him to take his son’s life.

The ritual slaughter of an animal is in remembrance and gratefulness of Allah’s mercy to Abraham when he stopped him short of killing his son and instead offered him a ram.

In Houston, Texas, American Muslims celebrated just as their Muslim brethren around the world.

They attended the mosque for a special `Eid prayer and sermon before heading to local farms to collect their sheep or goat and then cooking and sharing the meat with family, friends, neighbors, and the needy. They visited family and friends and they exchanged gifts.

But one group of volunteers took things one step further. A group of about 10 Houston women and men organized and put on the Need For `Eid event the weekend before `Eid Al-Adha. The effort focused on collecting new and gently used clothing for refugee children living in Houston.

Maria Serrato is one of the group’s members. She said she and her fellow volunteers were inspired when others organized a similar effort on `Eid Al-Fitr to commemorate the end of Ramadan.

“We thought it would be a good idea to do it again,” Serrato told AboutIslam.net.

Once the decision was made, the group got to work advertising the event on Facebook and announcing the need for donations at Friday prayers for two months leading up to `Eid Al-Adha.

They also reached out to refugee families to gauge their needs, asses how many might be served, and set up a donation list on Amazon where people could purchase new and needed items. 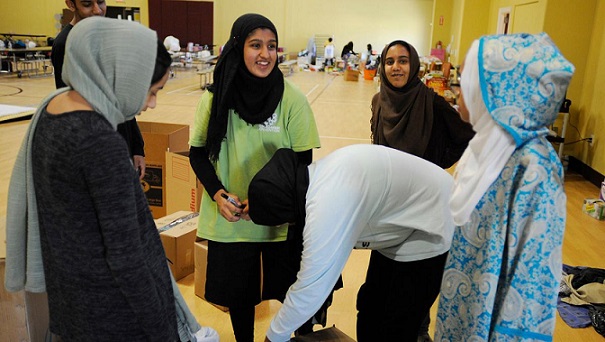 Serrato said the community was eager to give and ended up donating more than she and her group anticipated.

“The response was very overwhelming,” she said.

“We got double what we needed, and we were able to send the rest of the clothes to other mosques that were serving refugees.”

The robust response also enabled the group to outfit many of the children’s parents with new or gently used clothing.

“Our target was just refugee children, but we started receiving so many donations of clothing that we were even able to give to the moms and dads, too,” she said.

The Need For `Eid event was held at Houston’s River Oaks Islamic Center, which is part of the Islamic Society of Greater Houston, a network of 22 masjids.

About 300 people were served at the function. The donated goods were set up so people could “shop” for what they liked.

Serrato said each person received a full outfit of clothes and the parents picked out what home goods they needed.

Serrato said she hoped she and her fellow volunteers might repeat the event in the future.

“The need is really here in Houston for refugee families, so we’d definitely love to continue and keep on helping them,” she said.

“It’s a great tradition to have.”