RIO DE JANEIRO – In a stark contrast to the revealing uniform worn by beach volleyball teams (i.e. bikinis for women), two Muslim players in the Egyptian team have shown a different pattern for their match against Germany, wearing long sleeves and long pants.

“I have worn the hijab for 10 years,” Doaa Elghobashy said after the opening match versus Germany, AP reported on Monday, August 8.

“It doesn’t keep me away from the things I love to do, and beach volleyball is one of them.”

When the Egyptian women’s beach volleyball team took to the sandy arena wearing long sleeves and leggings, it was a sharp contrast to the German team’s revealing outfit.

Elghobashy and partner Nada Meawad qualified for the Summer Games through a regional competition designed to open the Olympic field to countries beyond the Brazilians, Americans and Europeans who dominate the international pro tour.

They were able to participate in the games after the international volleyball federation eased regulations before the London Games so as not to exclude cultures that might be turned off by the standard bikinis for women and boardshorts for men.

The diversity that appeared at the Copacabana venue on Sunday night was one of the goals of the new regulations allowing hijab.

“It was to open it up culturally,” FIVB spokesman Richard Baker said on Sunday night as the Egyptians played in their opening match of the Rio Games.

“The goal was to allow more people to play the sport of volleyball.”

Egypt had never qualified for either the men’s or women’s beach volleyball tournament at the Olympics.

“I’m proud to be seen raising the Egyptian flag in a carnival with so many nations,” Elghobashy said. 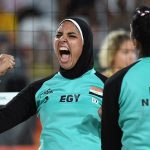 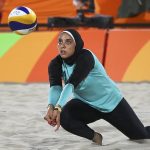 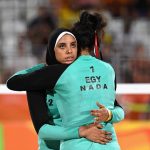 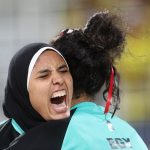 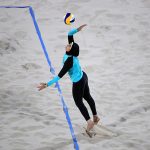