CORKTOWN, Detroit – As families gathered in warm homes on Christmas Eve, a group of Muslim residents in Corktown, Detroit, volunteered to give a helping hand to those in need, ClickOnDetroit reported.

“We’re alleviating volunteers who would normally like to celebrate the holidays,” said Kayla Botelho, from Mercy-USA for Aid and Development.

Botelho and other volunteers from the Mercy-USA for Aid and Development served up meals at the soup kitchen inside St. Peter’s Episcopal Church.

Though Muslims don’t celebrate Christmas, Botelho said it is a time of year for everyone to give back.

“This is one way that a lot of Muslims express their holiday spirit is through service projects,” she said. “A huge part of our faith is giving back in charitable efforts.” 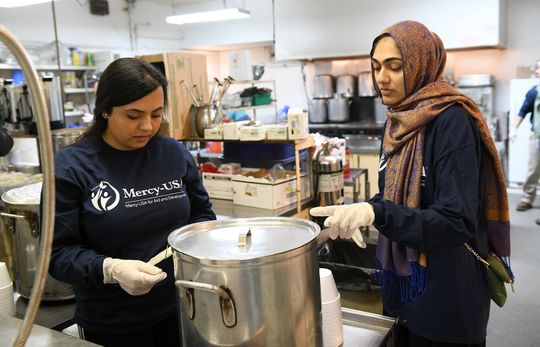 Volunteers helped out by distributing canned goods and preparing and serving a meal to about 200 people.

“Well, there was soup, fruit, doughnuts, coffee,” said Hibah Naseer. “All of the food that makes you feel good.”

The effort allowed some Muslims to enter a church for the first time.

“I’ve actually never been to a church,” Naseer said.

“I’ve wanted to come to a church for a long time. So this is my first time at a church, and it was really rewarding seeing people with other faiths coming together for a common cause.”

Christmas is the main festival on the Christian calendar. Its celebrations reach its peak at 12:00 PM on December 24 of every year.