Volunteers prepare the iftar meal outside the Diyanet Mosque of New Haven, Conn., on May 20, 2019. RNS photo by Rhonda Roumani
aaa

Shocked by mosque arson a week ago, the Muslim community in New Haven, Connecticut, gathered Wednesday in front of the building for a Ramadan community iftar, Religion News Service reported.

“Normally we have 200 people every night at our iftars,” said Hulya Elevli, 49, a teacher at the mosque’s school.

“Our people did not come today.”

The Diyanet Mosque of New Haven was set ablaze in broad daylight on May 12, destroying much of the ground floor and blackening the front of the building.

The following day, New Haven law enforcement officials announced that the fire was the result of arson. The FBI and other federal agencies were called in to conduct their own investigations. 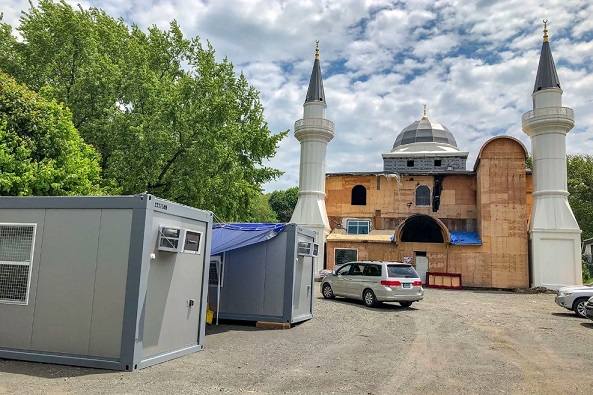 In an attempt to return to the Ramadan mood, the community hosted an iftar to which only three dozen members attended.

“I feel like I can’t look behind me,” said Elevli, facing trailers in the parking lot so as not to look at the damage.

“I see the minarets and it’s terrible. They’re right there, right behind me. And we’re out here, outside, instead of inside. I can’t believe this happened to us.

“This house is like one of my children,” said Elevli. “We worked so hard. Step by step, we built every inch of this mosque.” 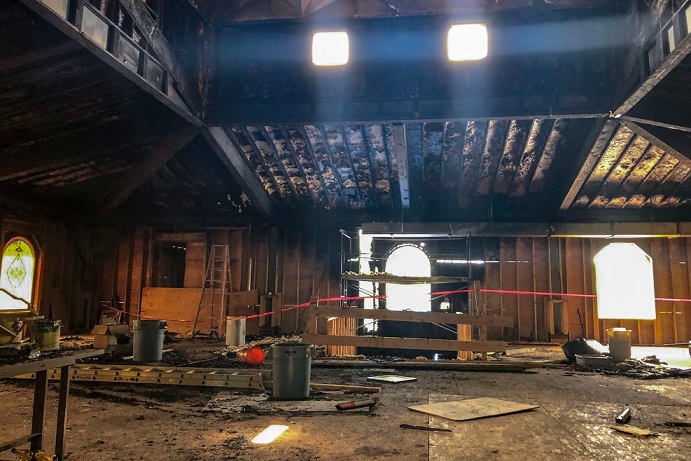 The Diyanet Mosque of New Haven’s third floor, a domed prayer area that had not yet been completed, was destroyed in the fire. Congregants had planned to use the area for Eid prayer at the end of Ramadan. RNS photo by Rhonda Roumani

An outpouring of support from neighbors and other local faith communities has helped soften the shock.

Hundreds came to the mosque on Thursday (May 16) for a vigil, and at a Friday news conference called by New Haven Mayor Toni Harp, US Sen. Richard Blumenthal called the attack an “act of terrorism.”

“It feels terrible. Devastating. Like we lost our second home,” said Fazilet Ozkarakoc, a mother of three who had attended a Qur’an reading earlier that day. “It’s the holy month of Ramadan. You don’t expect this much evil to happen.”

According to Abbas Barzegar, the national research and advocacy director at the Council on American-Islamic Relations, “anti-Muslim sentiment has been on the rise since the election season of 2015, with a spike in 2017 after the declaration of the Muslim ban,” referring to President Trump’s executive order restricting entry to the US for residents of five Muslim-majority countries. 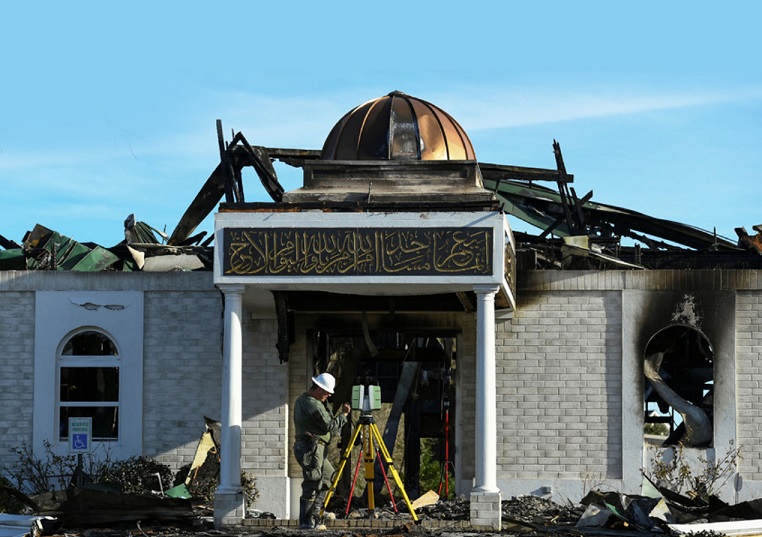 A report published by CAIR titled “Targeted: 2018 Civil Rights Report” recorded 144 anti-mosque incidents in 2017, of which 57 were labeled hate crimes.

According to leading American activists, American Muslims are more vulnerable to bigotry and Islamophobia as a result of Trump’s policies than they were after the 9/11 attacks.

Between January and September 2017, CAIR recorded 1,656 so-called “bias incidents” and 195 hate crimes against Muslims in the USA. That represented a 9% increase in bias incidents and a 20% rise in hate crimes compared to 2016.