The vandalism of the new welcome sign at the Islamic Centre of Grand Junction, Colorado, has prompted community to show support and start crowdfunding to repair the damaged sign, The Daily Sentinel reported.

“The good outweighs the bad,” said Abdelghani Essaifi, who works at the mosque, also known as Two Rivers Mosque.

The mosque unveiled a new welcome sign Aug. 31 to a crowd of more than 100 community members. But less than three weeks later, it was spray painted from top to bottom.

Neighbors and community members stopped by Wednesday morning and afternoon asking if the mosque needed help.

A few hours after the attack, a GoFundMe campaign, organized by Grand Junction City Council member Anna Stout, was established to “repair/replace the sign and make lighting upgrades on the outside of the building to prevent this kind of hateful bigotry in the future.”

“I just kept thinking to myself, ‘This can’t exist in this community, this hatred,’” Stout told The Daily Sentinel.

“I wish I could say I was shocked, but I think I was more heartbroken than I was shocked. I think that’s devastating that our initial reaction is that something like this was bound to happen.” 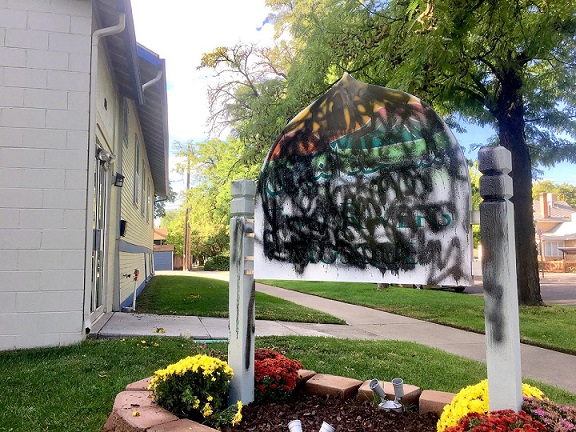 A report published by CAIR titled “Targeted: 2018 Civil Rights Report” recorded 144 anti-mosque incidents in 2017, of which 57 were labeled hate crimes.

According to leading American activists, Muslims are more vulnerable to bigotry and Islamophobia as a result of Trump’s policies than they were after the 9/11 attacks.

Between January and September 2017, CAIR recorded 1,656 so-called “bias incidents” and 195 hate crimes against Muslims in the USA. That represented a 9% increase in bias incidents and a 20% rise in hate crimes compared to 2016.

Yet, the local communities have offered support to the Muslim community in many cases.

In January 2017, more than 12,836 people raised more than $500K to rebuild a mosque in Victoria, Texas after a fire tore through the complex.