CHICAGO – More than 100 people of different faiths gathered on Saturday, November 12, to denounce rising Islamophobia in America, sending a powerful message of unity against anti-Muslim hate crimes spurred by the election season.

After a brief rally, organized by Jewish Voice for Peace and other interfaith groups, community members split up into teams and traveled to businesses across Oak Lawn, asking owners to post signs in their windows that read “We support our Muslim neighbors.”

The calls followed the election of Donald Trump as America’s 45th president.

Trump has targeted Muslims since the early days of his campaign, calling for a ban on them entering the US, and suggesting that they carry identification cards.

The Council on American-Islamic Relations (CAIR) reported an “unprecedented spike” in Islamophobic hate crimes “attributed at least in part to statements and policy proposals made by public figures like GOP presidential nominee Donald Trump.” 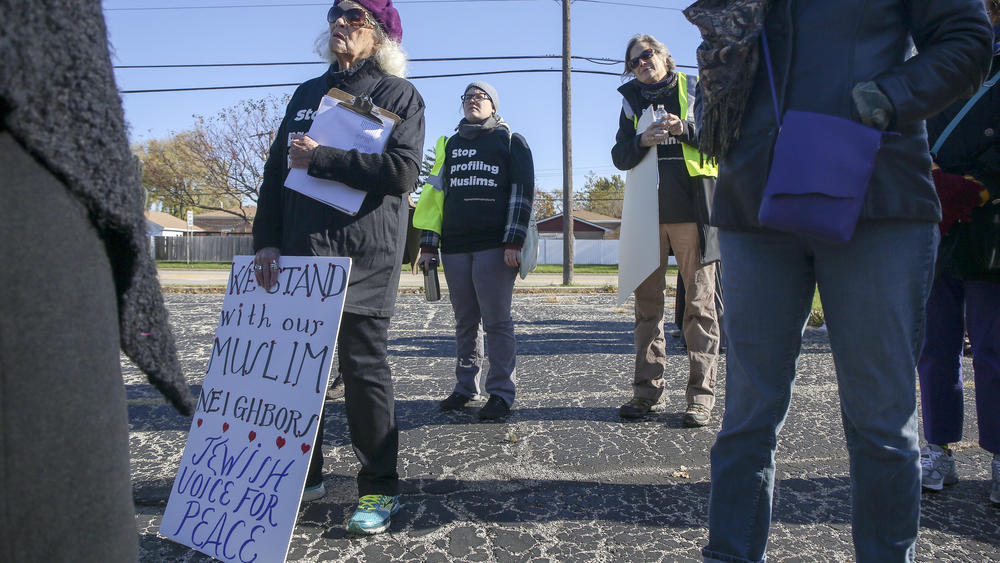 A Georgetown University report confirmed CAIR’s statement, saying there were 53 attacks against Muslims in December 2015. Meanwhile, only two such attacks happened at the start of the election season.

Michael Kooy, of the Oak Lawn Clergy and Religious Workers Association, urged Christians to support other faiths, saying that working with Muslims has made him a “better Christian.”

“And some perceive they are threatened or see the harm that may come their way. Mercy urges me to stand up with people who are threatened in these ways.”

Barbara Lyons, a 79-year-old member of Jewish Voice for Peace who works on its anti-Islamophobia committee, led a group of 10 community members up and down 95th street, visiting businesses and asking their employees to post fliers supportive of Muslims in the windows of their shops.

An employee at Chimera’s Comics said the business has several Muslim customers, and that they should always feel welcome.

Lyns said community members should make every effort to support those who feel attacked or marginalized, no matter their religion.

“Anything you can do can make a difference,” she said. “The difference between doing nothing and doing something? It’s everything.”