These words, by teacher Melissa Falkowski, are a harrowing reminder of how the image of the US is changing.

As children around the world go to school and “train” for everything from their sports to their studies, in the United States today, most school children are ‘trained’ for what appears to be the inevitable: yet another school shooting.

As a child growing up, the US was all about great TV shows such as Air Wolf, Knight Ridder, and Baywatch. We’d holiday at Disney and visit friends in New Jersey. I remember a fly drive: landing in one city, then driving to another, where we had breakfast at McDonald’s every day for two weeks, a child’s dream in the 80s.

But today, while I have many American friends who are seasoned professionals in technology and finance, and have made many more friends through social media, in the post 9/11 world, one thing that is now associated with the United States is mass school shootings. This would be called ‘terrorism’ if it wasn’t for the fact that the absolute vast majority of those committing these heinous acts are Caucasian.

Commenting on the murder, American President Trump posted a Tweet:

“My prayers and condolences to the families of the victims of the terrible Florida shooting. No child, teacher, or anyone else should ever feel unsafe in an American school.”

My prayers and condolences to the families of the victims of the terrible Florida shooting. No child, teacher or anyone else should ever feel unsafe in an American school.

The only heroes in such tragedies are those such as Aaron Feis, a football coach at the school, who it is reported to have stepped in front of the bullets to protect his students. God bless his soul.

Speaking at the US Senate, American politician, Senator Chris Murphy said, “What looks to be the 19th school shooting in this country and we have not even hit March… This happens nowhere else other than the United States of America, this epidemic of mass slaughter.”

Such is his anger that he later Tweeted: “Don’t tell me tomorrow isn’t the appropriate time to debate gun violence. If you’re a political leader doing nothing about slaughter, you’re an accomplice.”

Like Brexit in the UK, President Trump rose to authority on a strategy which causes division. It pitches one group of people against the other, a claim to represent the everyday person against the rich.

The only ones seduced by his campaigning were those who were genuinely in fear for their jobs and their future. Instead of addressing the causes of these issues—such as globalization, competition, and the ever-increasing influence of automation, which will impact every industry in every country increasingly—blame was placed on others.

‘It’s the Muslims, they’re responsible for terrorism, let’s ban some of them.’

This convenience of blame is not a responsible and pragmatic approach to addressing genuine concerns. It is a laziness that can only be sustained by a president who spends more time concerned about his play on the golf course than on the well-being of his citizens. 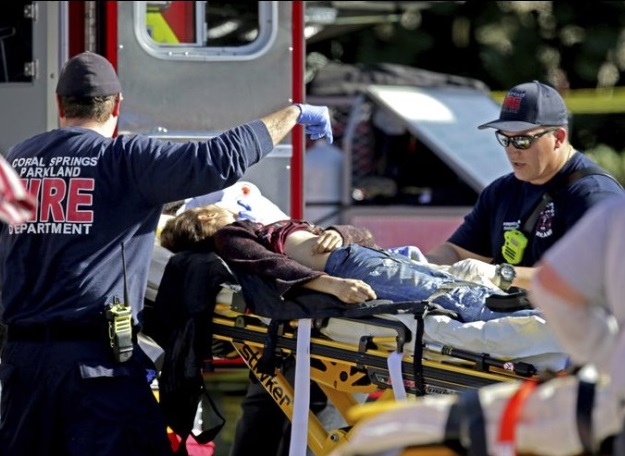 Today, politicians must come together and make effective changes to the gun laws, if only to save the lives of children; God knows they haven’t cared enough to do so yet.

Then instead, perhaps we can appeal to their vanity, repackaging a change to the gun laws to be something that portrays the gun industry in a better, more positive way, evoking an emotional response and changing their current negative image.

One would hope that common sense, decency, sensibility, and a desire to save a human life would be a sufficient motivation. Sadly as each terrorist’s act of gun violence shows, it is not.

My thoughts and prayers are not just for the victims, their families and their friends. No, I am making an appeal to God to have mercy on us and inspire our political leaders to do what is better for us, and in the case of America, change their gun laws.

I grew up with a very different, albeit candy-coated, image of America. No matter what good it might do, the nation’s image today is of a lawless land with gun violence in its schools. The only ones who will change America for the better will be Americans themselves.

So God bless America indeed; protect their children from their homegrown white terrorists, and investigate how they have become radicalized. They need every blessing they can get.

Like so many today, I am driven to tears, not just of sadness, but of hope: Hope that whatever the circumstances are today, we can always find a better way. Hope that a day will come where children growing up in America will no longer have to train for incidents of terrorist gun violence.