BOSTON – Diversity, love and compassion are the three weapons an American imam is using with his congregation to make America great.

“That is what our religion calls us to,” Shaykh Yasir Fahmy, the senior imam at the Islamic Society of Boston Cultural Center, said during a recent sermon, PRI reported on Monday, March 6.

“It calls us to care genuinely about the well-being of every single one of the members of our society, with deep love, with deep sincerity, with deep empathy, with deep compassion and with deep mercy.”

“That,” Fahmy preached, “is a pathway towards making America great.”

The imam sees a greater role in times of fear and anxiety for many Muslims in America.

“Our notion of justice and mercy is not about the self,” the imam said during an interview at his office in the mosque.

“It’s not about just Muslims being OK, but it’s more about living prophecy and trying to live prophetically in society.”

To achieve his end, the imam urged his congregation to help build stronger connections with the wider community, including the non-Muslim majority population of Boston.

Therefore, he opens the doors of his mosque in the Roxbury neighborhood for a town hall meeting, the last of which was held on a recent Friday night. 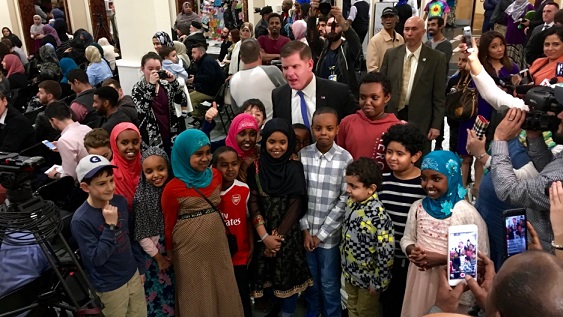 Boston Mayor Marty Walsh attended a town hall meeting at the Islamic Society of Boston Cultural Center on the evening of Feb. 24, 2017.

The guest of honor at the public gathering in late February was Boston’s mayor, Marty Walsh, who has become an outspoken ally of Fahmy and the Islamic Society of Boston.

“I want to offer peace to all of you of different faiths,” he said.

The mayor, asserted his opposition to Trump’s executive order barring refugees and citizens from a handful of Muslim-majority nations, saying it might impact Boston residents and their families and friends.

“When I went to grammar school in 1971 and 1972, if this same order came down, you know something? My mother wasn’t a citizen at that point. She had a green card. So, I’d be afraid,” Walsh said.

“I think that what’s happened is that there’s been this broad brush painted that every Muslim is a terrorist,” he told me.

“We all have people in all our faiths that might not be law abiding. But you don’t paint the whole community that way because of certain individuals,” said Walsh, who is Catholic.

When Shaykh Fahmy delivered his last Friday sermon in February, he borrowed a phrase from President Trump.

“Brothers and sisters, if we want to make America great, then we have to heed the guidance of the Prophet [Muhammad],” Fahmy said.