Almost one year after the shooting, Sacramento prosecutors announced that the two police officers responsible for Clark’s death would not face charges.

“We must recognize that they are often forced to make split-second decisions,” said District Attorney Anne Marie Schubert.

The district attorney defended the officers’ use of lethal force during a press conference. “We must recognize that they are under tense uncertain and rapidly evolving circumstances.”

After the spread of the decisions’s news, hundreds of high school and college students protested at the California state capitol, resulting in 84 arrests. There was another vigil turned protest at the District Attorney’s office.

Black Americans struggle with stark realities about the increased potential of dying when engaging with law enforcement. Black people in the US are three times more likely to die at the hands of police, who often face little to no accountability.

At the time of the killing, Black Muslims mourned Clark’s death and called for Muslim communities to become more concerned about and involved with combatting police violence.

“Far too many Black communities, including Black Muslim communities, have been painfully aware of the ways that law enforcement officers can abuse their power and engage in discriminatory and unjust conduct,” explained Jonathan Smith, legal advocate for Muslim Advocates.

“The tragic death of Stephon Clark is sadly only the latest example of what has sadly become an all-too-frequent trend.”

Black Muslims continue to engage on the ground and discuss the issue of police brutality inside and outside of Muslim communities.

Tariq El-Amin, imam of Masjid Al-Taqwa and Margari Aziz of the Muslim Anti-Racism Collaborative, told AboutIslam what disturbing messages the choice not to prosecute police officers sends about the accountability of law enforcement and value of Black lives.

“The prosecutor’s decision not to charge the officers with the killing of Stephon Clark affirms two things: 1) a refusal to hold law enforcement accountable for bad judgment and 2) Black lives do not matter.

We often hear police say ‘we have to make life or death split second decisions;’ well, so do emergency surgeons, firefighters, and millions of drivers on the road every day.

[There is] an accepted assumption of criminality when encountering Black men which automatically justifies the use of deadly force, and also means that de-escalation tactics and non-life-threatening measures are employed at lower rates than when dealing with whites.”

The Sacramento DA’s decision not to bring the case to trial shows that we must continue to push for changes in policing and accountability,” said Aziza.

Even the way they smeared Stephon’s name points to the vulnerability of Black life, and if someone has mental and emotional issues, they can justify their fear of them and kill them.” 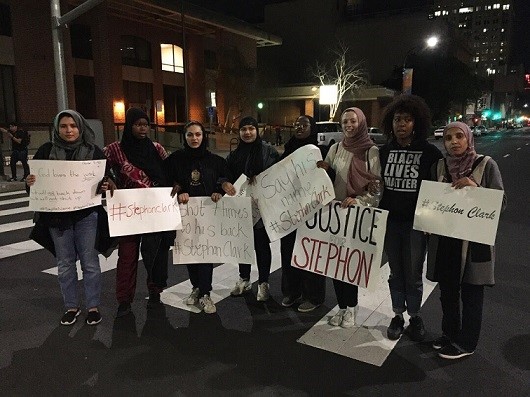 Why All Muslims Should Care

Apathy about the deaths of Black people—Muslims and non-Muslims—is prevalent among US Muslims.

In 2016, Eman Idil shed a lens on the comparatively less attention given to the murders of three Black Muslim men—Mohamed Taha Omar, 23, Adam Kamel Mekki, 20, and Muhannad Adam Tairab, 17—by US Muslims to the widespread outcry over the killings of non-Black Muslims Deah Shaddy Barakat, Yusor Mohammad and Razan Mohammad.

“There is a startling difference in these two tragedies: The response from the Muslim community. From our supposed Ummah, there has been a deafening silence…We only ever rally for Arab countries, protest for every uprising in Palestine and injustice in the Middle East, but are met with silence when it is Black Muslim bodies that are facing persecution.”

It was not until Stephon Clark’s faith was revealed that many US Muslims paid attention to his murder in 2018.

“Once some non-Black American Muslims realized he was Muslim, then they felt concerned,” said activist, Rasheed Shabazz.

“That’s unfortunate that another human did not matter until they learned they apparently shared the same faith.”

Black Muslims continue to encourage their non-black coreligionists to look beyond faith, race and ethnic identities and appreciate the importance for all Muslims to speak out against police violence and demand justice for everyone.

“It is our issue because we are supposed to stand for justice, even if against our own kin,” said Aziza.

The protecting of Black life and speaking out against unjust killings that are sanctioned or justified by the state is our duty as citizens. If we believe in justice, freedom, equality and hope for a pluralistic society where everyone feels safe, welcome, and equal, then we have to be consistent.