Since April, groups of Muslims have joined Border Church in prayer along the U.S.-Mexico border near San Diego. Photo courtesy of CAIR-San Diego
aaa

A Muslim and a Methodist groups will come together on Sunday, October 27, to co-host “Pray Beyond Borders” service.

This is a binational day of prayer that will include indigenous, Muslim, Christian and Jewish leaders, as well as civil rights activist Linda Sarsour, Religion News Service reported.

Dustin Craun, executive director of the San Diego branch of the Council on American-Islamic Relations, said the interfaith work at Friendship Park “is primarily about the families and keeping that space open.”

“All the different administrations have further militarized Friendship Park and have come close to closing it,” said Craun, who helped organize Border Mosque and Sunday’s event.

Since last April, the Border Church, or La Iglesia Fronteriza, has blossomed into a multifaith movement that includes a group of Muslims, who call themselves the Border Mosque.

Sunday’s event comes a year after new US government restrictions took effect at the site, limiting the number of people allowed in the park to 10, down from 25.

Moreover, Fanestil said he wants to Pray Beyond Borders to send a message that the U.S.-Mexico border “is a very human place.”

“It’s a place of human encounter, of friendship, of peaceful relationship, of communion, of solidarity,” said Fanestil, a pastor at First United Methodist Church of San Diego.

“This is what the daily life on the border is like for the vast majority of people.” 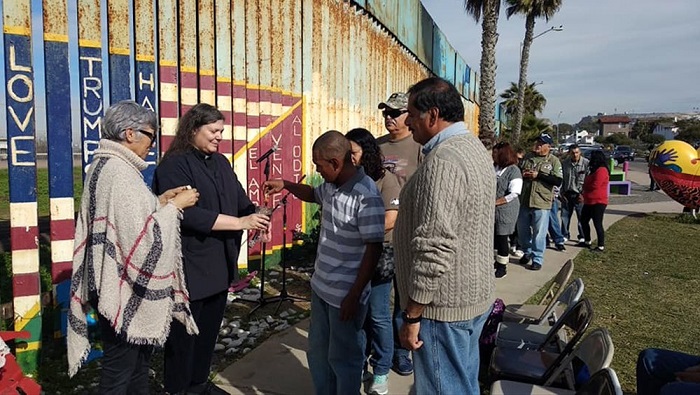 People celebrate Communion at Border Church on the Tijuana side of the border in January 2019. Photo courtesy of Border Church

Sonia Garcia, the founder of the Latina Muslim Foundation, said that the Border Mosque is a way for Muslims, who have faced immigration difficulties since 9/11, to expand their activism.

She added that Muslim voices need to “be heard in all borders,” and to stand for deported people and separated families no matter their national origin.

“If we don’t unite, there will be no change,” Garcia said.

Muslims have been campaigning to support migrants and their families over the past year.

A few months ago, American Muslims kicked off a new campaign to bail out detained migrant parents, helping to reunite their families as soon as possible.