The fight to defeat Pres. Donald Trump in the 2020 election is on nationwide, but Saturday night it was front and center at the 56th annual national convention of the Islamic Society of North America (ISNA) when Democratic candidates Bernie Sanders and Julian Castro addressed a packed house of nearly 7,000 Muslims, proclaiming their political platforms and asking for their vote.

Shared goals of combating climate change, providing universal health care, offering free or increased access to education all the way from pre-Kindergarten to college to immigration reform were discussed. But each candidate – the only two of all presidential candidates to accept ISNA’s speaking invitation – spoke about his specific vision should he win the Oval Office.

For Sanders, the junior US senator from Vermont, human rights was front and center in his promised approach to a would-be presidency, including immediately rescinding Trump’s so-called Muslim ban and approaching the long-standing and often volatile Israeli-Palestinian conflict.

Sanders, the son of Jewish immigrants, made clear he did not support a boycott of Israel or any movement which supports such a move. However, he said he does seek a two-state solution, one where Palestinians can govern themselves and live in peace. He emphasized the need to approach the situation from a human rights point of view and dignity for all involved.

“The US needs to engage in an even-handed approach to end the Israeli occupation and help the Palestinian people on to independence in a sovereign state of their own,” he said to applause. “That is best for everyone.”

Both Sanders and Castro, a cabinet member under former Pres. Barack Obama, said the rise of white nationalism, bigotry, racism, and the resulting hate crimes are a direct result of Trump’s rhetoric, which they called divisive and dangerous. 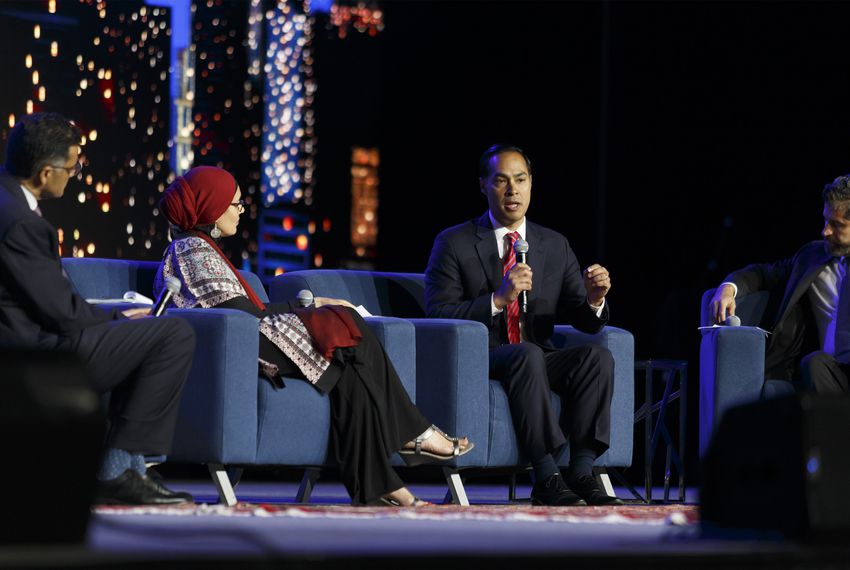 From there, Castro linked his speech to immigration, particularly the plight of those seeking asylum. He criticized the current administration for its handling of immigrants seeking asylum, often from Central and South American countries.

“We need to stop playing games with people who are seeking asylum in our country,” Castro said, before a pitch to expand the judicial system including adding more judges to deal swiftly with asylum cases so people can have their cases heard quickly.

Sanders agreed. He argued the US’s asylum process should be one based on compassion and not on treating people like criminals.