CAIRO – Donald Trump’s disparaging comments about Khizr and Ghazala Khan, the parents of an Army captain killed by a car bomb in Iraq in 2004, have emotionally disturbed many American Muslims serving in the military.

“These are people who sacrificed their own child, their own blood.”

Deployed three times during his service, Rashid said his anger is tempered by his own experience in the military, where people were overwhelmingly accepting and supportive.

“I experienced nothing but love and camaraderie from all the Marines I served with,” said Rashid, who joined the Marines in 1997.

“I was often the first Muslim many of them had ever met, but there was no racism, no bigotry. It doesn’t really matter your faith: We were all Marines first.”

Trump’s disparaging comments about the Khans is not the first time for the Republican presidential candidate to anger Muslims, including Rashid.

When Trump said he would consider making Muslims in the United States carry special identification cards, Rashid reached into his wallet and pulled out his military ID, then posted a picture of it online.

“Hey @realDonaldTrump, I’m an American Muslim and I already carry a special ID badge. Where’s yours?” he wrote on Twitter.

Trump’s hateful comments were not making life easier for Muslims in the military who already face numerous challenges.

For one, 15 years of war in Muslim countries have made serving in the military a cultural minefield. 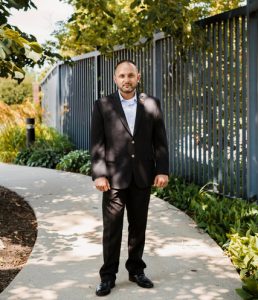 “It can be challenging,” said Rashid, whose family moved from Pakistan when he was 10.

Cultural barriers also posed a problem for many with regard to the military ban of beard; non-halal food and lack of enough chaplains, with only five of the Army’s roughly 2,900 chaplains are Muslim imams.

“It can be challenging,” said Rashid, whose family moved from Pakistan when he was 10.

“The nature of military service is not very conducive to practicing your faith, but Islam is flexible.”

“I am here as an American,” he added. “I benefit from the liberty and opportunity of this country, and it is my obligation to serve this nation in some way.”

For many Muslim soldiers, life in the military became harder after the September 11 attacks.

“After 9/11, I really started noticing a change,” said Mansoor Shams, who was born in Pakistan and served in the Marine Corps from 2000 to 2004.

“A few guys made negative comments, sometimes half-joking, calling me the Taliban. I decided to nip it in the bud, and most of the guys understood.”

Some troops also find it difficult to fight in countries their families may be from.

For many Muslims, however, military life was a perfect experience of mutual understanding and respect.

Captain Kassim, a child of Palestinian refugees who graduated from the United States Military Academy in 2010, has felt nothing but support from the military since he was a cadet, he said.

“I was never singled out for being a guy named Nadi Kassim,” he said. “The Army minimizes differences and rewards achievement, and I really thrived in that.”

When a recent field exercise fell during Ramadan, Captain Kassim said, the support unit doing the cooking set aside meals so he and another Muslim could eat after sunset. 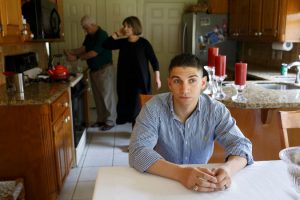 Capt. Nadi Kassim, with his parents, said he had felt nothing but support from the Army since he was a cadet at West Point.

“We did not ask them to,” he said. “They just did it on their own to show they supported us.”

Thousands of Muslims have served in the military since at least the Civil War, but they make up a disproportionately small portion of the force.

Just 3,939 troops currently list their faith as Islam, according to Pentagon data, making up just 0.3 percent of the military. Muslims are estimated to make up about 1 percent of the civilian population.

The Pentagon does not keep track of Muslim troops killed in combat since 2001, but it’s certain they have served in all branches, as officers, combat troops, interpreters and intelligence gatherers.