NEW YORK – American Muslim groups and scholars have condemned the deadly truck attack on the West Side Highway bike path in Manhattan, praying for the victims and their families.

“CAIR condemns today’s horrific and cowardly attack in Manhattan and offers sincere condolences to the loved ones of those killed and injured. Since the goal of such heinous crimes is to divide our nation, it is incumbent on Americans of all faiths and backgrounds to frustrate that criminal objective by standing united in the face of terror,” the Council on American-Islamic Relations (CAIR) said in a statement sent to AboutIslam.net.

Tuesday’s attack occurred when the driver of a rented pickup truck deliberately drove down a bike path in Lower Manhattan, killing eight people and injuring about a dozen more.

The suspect was identified by law enforcement sources as Sayfullo Habibullaevic Saipov, an Uzbek citizen who has been living in the US since 2010.

A police officer on patrol in the area opened fire, hitting the suspect in the abdomen and ending what New York Mayor Bill de Blasio called “an act of terror.” 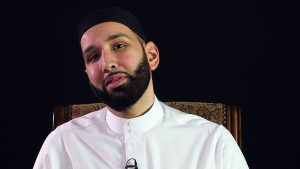 Imam Omar Suleiman, the Founder and President of the Yaqeen Institute for Islamic Research, has also condemned the “horrible” attack.

“My thoughts and prayers are with the victims and their families in #Manhattan after the horrible attack today,” Suleiman wrote on his official Facebook page.

Meanwhile, Catholic leaders issued a statement confirming that Islam has nothing to do with terrorism.

“Today our city and our nation are stunned and horrified by another senseless act of violence. While details continue to emerge: once again, no matter our religion, racial or ethnic background, or political beliefs, we must put our differences aside and come together in faith and love to support those who are injured, pray for those who died as well as their families and loved ones,” Catholic Cardinal Timothy Dolan said in a statement.

Muslims mourned the victims, adding that New Yorkers will show the city’s unity and compassion in the face of these attacks.

“Like all New Yorkers, we mourn those who died today, and our thoughts are with the families and friends they leave behind,” said CAIR-NY Legal Director Albert Fox Cahn.

“In the wake of this tragedy, we know that New Yorkers will not only show our city’s enduring resilience, but we will prove that our love and compassion are stronger than anyone who attacks and divides us.”

The Colorado chapter of the group has also condemned the attack in a statement issued on Tuesday.

“CAIR-CO categorically condemns today’s horrific and cowardly attack on our fellow Americans in New York City and offers sincere condolences to the loved ones of those killed and injured,” said CAIR-CO Board Chair Farid Amin in a statement.

Krista Cole, CAIR-Co vice-Chair, added: “Like all Coloradoans, we mourn those who died today, and our sincere thoughts and prayers are with the families and friends they leave behind. In the wake of this tragedy, we know that Coloradoans will not only show that we are resilient in the face of such attacks, but we will prove that our love and compassion are stronger than anyone who seeks to divide us.”