HOUSTON – Although many Muslims consider `Eid Al-Adha the more important of the two yearly Islamic festivals, the holiday can result in a mixed bag of emotions for American Muslims and those living abroad. What’s more, the reasons behind the range of reactions – both positive and negative – to this most sacred festival are varied.

Some Muslims based in the United States say there isn’t much build up to `Eid Al-Adha, with many of them having to attend work or finding it difficult for their children to miss school. In essence, for large numbers of the American faithful, it’s just another day despite their best intentions to make it special.

This is in direct contrast to `Eid Al-Fitr, which is celebrated at the culmination of Ramadan. This holiday comes after a month of fasting and nightly congregational prayer coupled with several family- and friend-filled iftars to close out a day of fasting. In other words, there’s a heightened sense of community and ambiance surrounding `Eid Al-Fitr that’s simmered during the entire month of Ramadan.

The atmosphere is decidedly different during `Eid Al-Adha. As one social media poster commented, “Yet another `Eid that doesn’t feel like an `Eid. I barely feel Muslim.”

This problem may seem rare or even exaggerated, but indeed several Muslims told AboutIslam.net that they feel “disconnected” to the holiday, in large part because it can seem like just another inconsequential day on the calendar.

“We usually try to visit my mother-in-law and sister-in-law on `Eid. But this year, my husband just couldn’t get off of work because it’s too busy,” said Maryam Murray as she attended `Eid prayers in Houston.

“I guess we aren’t going to do anything this evening either because tomorrow is a school day and we have to do homework and get the kids ready for an early bedtime. It’s kinda sad.”

For those Muslims who have deep-rooted traditions in Islamic countries, the feeling can be even starker.

Amir Mustafa, an Iraqi native, has lived in the United States for several years, is a US citizen and considers himself American.

Still, he admits it’s hard for him to stir up excitement among himself and his family on `Eid Al-Adha, particularly due to the absence of other family members with which to celebrate.

“My wife and I make sure to buy the kids presents, which of course they love, but this year it hit me hard when my son, whose grandparents are Christian, said now that he had gotten his one `Eid present he couldn’t wait for all the presents grandma and grandpa were going to get him for Christmas,” Mustafa said.

Despite the difficulties of mustering excitement, Mustafa and his family did travel to a rural farm along with a few other families where they all performed the sacrifice together and then shared the food. 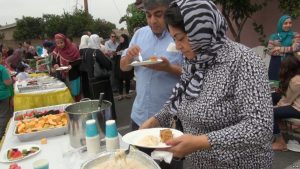 Moroccan-based expat Amanda Ponzio-Mouttaki said when she lived in the United States she and her family would join others for picnics.

“People were from all over the world and therefore had different ways of celebrating,” she said.

“At the end of the day the big takeaway was that everyone got together and celebrated. For them it was a way to connect with their traditions when they were far from their home countries.”

But what of the udhiyah, the sacrificial slaughter? Despite its deep and legitimate ties to `Eid Al-Adha, including the spiritual significance of killing an animal, eating and distributing its meat to family and to the poor, many Muslims say they are simply turned off by what they deem as disturbing or downright cruel slaughtering practices.

Furthermore, many Muslims worry putting so much significance on this part of the holiday only exacerbates what some feel is Muslims’ unhealthy love of meat, particularly how much of it they eat.

Nora Fitzgerald, an American born in and residing in Morocco, recently shared a fatwa about the necessity of slaughtering an animal from Dr. Khaled Abou El Fadl, a prominent and leading Islamic scholar of law. He also serves as a professor of Islamic law at the University of California, Los Angeles School of Law, and is the chair of the Islamic Studies Interdepartmental Program at UCLA.

According to Dr. El Fadl, “While the zakat due in the udhiyah remains obligatory, the consumption and providing of meat is not. In other words, one may slaughter and donate meat; one may pay for the slaughter and donation of meat; or one may simply donate the amount of money due directly to needy families for the recipients to spend it as they deem fit.”

Fitzgerald said she was troubled that some people she knew were not only unaware that meat consumption isn’t obligatory but that they went to great lengths, even if they can barely afford it, to make sure they have an animal to kill.

“The sheep in Morocco has become a status quo symbol,” she said.

“The fact that I know people who are literally beggars and yet on `Eid they go to great hardship to have a sheep like everyone else.”

“After having spent four `Eids in Morocco, I have seen that it’s far from being something to do only if you can, but instead it’s something you do no matter what. I’ve seen families who have no extra budget for a sheep go into debt to buy their sheep or forego other essentials.”

Fitzgerald said she hoped “forward-thinking” Muslims such as Dr. El Fadl and others of a similar mind might help the ummah reconnect with the deeper meaning and intention behind `Eid Al-Adha.

According to Dr. El Fadl, the most important part of the `Eid is bringing different classes of people together and fostering community.

He wrote, “The point of `Eid Al-Adha is not the sheep or the meat; the point is sharing and community and, above all, brotherhood and sisterhood in the true sense of the word.”