“Anyone who thinks that Muslims have not been active in combating oppression is only looking at a specific part of our history,” Shaykh Muhammad Mendes, founding director of Sacred Service for Human Liberation, explained to attendees during the keynote panel attended by AboutIslam.net correspondent.

Organized by the Muslim Wellness Foundation, the theme of this year’s conference was, “Deeply Rooted: Reflections on Black Muslim Activism, Resilience & Healing.”

The gathering offered numerous activities focusing on the history of activism by Black Muslims.

There were also opportunities to acquire a deeper understanding about the role of trauma stemming from systemic racism and methods of self-care.

Organizers state in the conference brochure, “This conference is dedicated to expanding the conversation on the challenges faced by Black Muslims as well as exploring strategies and opportunities for healing, solidarity, and authentic allyship.” 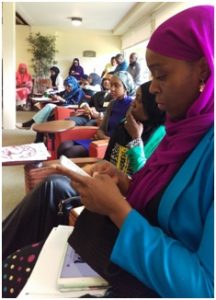 The event kicked off with a series of sessions with a variety of presentations pertaining to Black Muslim activism, trauma resulting from oppression, and methods of self-care to heal.

During the workshop From Slave Revolts to “Black Identity: Islam, Muslims & Struggle for African American Liberation”, Howard University professor Dr. Hakim Rashid presented a historical synopsis of the involvement of Black Muslims in centuries of struggle for liberation in the Americas.

In his workshop, “On Manhood, Race & Faith: Addressing the Emotional & Psychological Needs of Black Muslim Men,” Naeem utilized Qur’an and Sunnah as a foundation for stages of Black Muslim male development.

“Black Muslim masculinity has been under attack for quite a while (since slavery),” Naeem told the workshop audience.

In “Half your Deen: How Trauma and Anger Manifest in Muslim Marriages l Paths to Healing,” clinical psychologist and assistant professor of psychology Dr. Nicole Monteiro discussed the importance of marriage in the Islamic culture and how manifest trauma can destabilize a marital union.

After the workshops, conference participants listened to the works of poets, writers, and activists during the “Can I Get a Witness?” session. 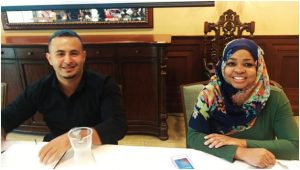 The second day of the event included a series of affinity group dialogues, which provided safe spaces for open discussions.

After facilitators explained the objectives of each affinity group, conference participants joined personal reflection sessions categorized for those identifying as Black Muslims, non-Black Muslims, and non-Muslims.

The Black Muslim group afforded a space for participants to reflect on their experiences as African American Muslims.

“Blackness has been both a motivation and an albatross for our community,” anthropologist Donna Auston explained.

“Muslim American issues are disconnected from the African American experience.”

“Many of our coreligionists actually contribute to the marginalization of Black Muslims.”

After lunch, the separate groups converged at the main hall to share their reflections.

The Black Muslim Psychology conference was well attended by activists and intellectuals from across the country and numerous backgrounds.

When asked why he attended the conference, Arab American Khaled Beydoun expressed the significance of appreciating a Muslim American experience outside of his own culture.

“It was important for me to come and listen to my fellow Muslims about their unique experiences,” Beydoun told AboutIslam.

Institute for Social Policy and Understanding project manager Sarrah Bageila told AboutIslam that she “wanted to go somewhere where I was a minority Muslim and learn from a variety of American Muslims.”