WASHINGTON, DC – Over 400 Muslim, Christian, and Jewish leaders from all over the world gathered in a two-day conference to develop a new declaration calling for promoting peace between followers of the three Abrahamic faiths and cultivating sentiments of goodwill and empathy toward each other.

“[W]e cannot love and serve God if we fail also to love our neighbors — including the strangers in our midst,” a declaration issued on Wednesday reads, KUNA reported.

“Recognizing that our shared values are more important than our differences, and that we are strongest when we act together, we pledge to combine our best efforts to foster unity where there is discord, aid the impoverished, tend the vulnerable, heal the poor in spirit, and support measures that will ensure respect for the dignity of every human being. We will be guided in this endeavor by convictions that flow from our deepest theological understandings.”

The “Washington Declaration” was unveiled by religious leaders who gathered for the three-day “Alliance of Virtue” conference organized by the Forum for Promoting Peace in Muslim Societies and its leader, Shaykh Abdallah Bin Bayyah, a Saudi Arabian Islamic Studies professor.

The conference intends to help faith leaders from Muslim, Christian, and Jewish religions encourage their fellow members to amicably engage with individuals and groups from other faith communities.

In his opening remarks, Bin Bayyah stressed that the foremost objective of the Forum is to reaffirm all the “critical” work done that embodies “peaceful coexistence and building of bridges and love between the religious leadership of Abrahamic faiths.”

During the Forum, Bin Bayyah announced the “Give Food” initiative that seeks to feed the hungry “from every race and creed.” He said that this initiative, in addition to being a “good deed,” is also the “embodiment of our forefather Abraham’s practice … given that he used to feed the guest.”

In conclusion, Bin Bayyah asked if it is possible to “revive an idea such as this alliance (Alliance of Virtue) in our modern societies? Can we come together to spread such goodness? “I sincerely believe that we are indeed able to do so as long as we do not despair from either the grace of God or from one another,” he remarked. 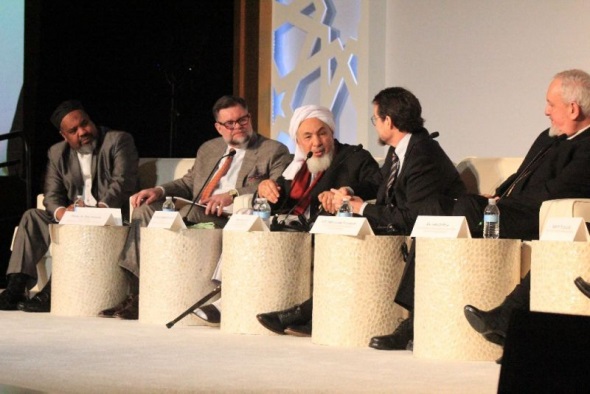 He pledged to deliver “initiatives to foreign governments at the highest levels and to my own government. This and similar initiatives are critical and we will do whatever possible to be supportive. This administration has made it clear that this a foreign policy and national security objective. I look forward to hearing from you how we can collectively and collaboratively achieve this shared objective.”

The initiative “serves as a model for what can be achieved when people from the Abrahamic faith backgrounds join together in a common cause,” he indicated.

The Minister of Foreign Affairs of Finland, Timo Soini, called the Alliance of Virtue conference in Washington “a great opportunity to mobilize mediators working inside traditional and faith-oriented groups.”

“It seems there is a need for creating a multi-religious body consisting of prominent religious actors to support mediation and reconciliation,” Soini said.

“Such a body would stand ready to intervene in the constructive manner when a political crisis or other disputes arise … in accordance with solid values and engage in mediation-oriented peace-seeking and fundamentally dialogical action, he said.

“If religion is part of the problem, it is also part of the solution. Both religious and political actors share the moral responsibility to make sure that this rings true,” he added.

He emphasized the need for a “wise response to the phobia of religions and the call for an effective dialogue to differentiate between understanding and conviction.”