A new study has revealed that 40 percent of Muslim students in California reported being bullied because of their faith, more than twice the national average for bullying in school for all students, Religion News Service reported.

“It is not hard to make a connection to the hateful and bigoted rhetoric used by this administration,” said Hussam Ayloush, executive director of the Los Angeles branch of the Council on American-Islamic Relations (CAIR-LA).

“The continual use of such rhetoric and the policies singling out and criminalizing Muslims, immigrants and asylum-seekers have normalized hate speech.”

The report, “Singled Out: Islamophobia in the Classroom and the Impact of Discrimination on Muslim Students,” is based on a statewide survey of about 1,500 Muslim students between 11 and 18 years old.

It came out Wednesday (Oct. 16) by the California chapter of the Council on American-Islamic Relations, or CAIR. 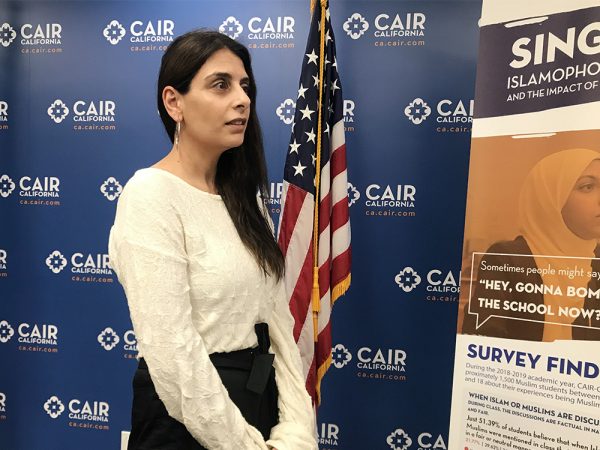 At a CAIR news conference on Oct. 16, 2019, in Anaheim, California, Ahlam Elabed speaks about the bullying her high school son has endured. RNS photo by Alejandra Molina

The organization found that 40% of participating students experienced some form of bullying because of their religion.

The percent, though double the national average, is down from 53% in 2017 who reported bullying for being Muslim.

During the news conference, Ahlam Elabed spoke of the bullying her high school son has endured while in school.

“I was horrified to discover that every day my son was going into an intolerant and ultimately unsafe environment,” Elabed said.

Although there are no official figures, there is between 6-8 million Muslims in the US.