In a YouTube video, a Dar Al-Iftaa representative said the game consists of “several elements” deemed to be “forbidden” in Islam, as quoted by Al-Masry el-Youm newspaper, Arab News reported on Sunday.

“After studies and research into the game, we say that it is a filthy game and causes harm. So we deem that it is forbidden. It is forbidden to play it and we ask our youth to spend their time in something that is productive for them and their society,” he added.

According to several media reports, “Blue Whale” has caused hundreds of victims worldwide since 2016, as participants follow a number of tasks for 50 days and commit suicide in the last mission.

According to ANSA Mediterranean, a court of first instance in the Tunisian city of Sousse ruled on March 8 to block the download and access of the game called ‘Mariam’, an Arabic version of Blue Whale, due to a series of adolescents deaths.

Moreover, Dubai Police in the UAE published an official statement earlier this month strictly warning people from the deadly game and asking parents to take necessary measures to stop their children from going through its 50 challenges.

Also in India, the Ministry of Electronics and Information Technology requested Google, Facebook, and Yahoo to remove the links which direct users to the game, with the Indian Supreme Court also taking a stance by asking the government to ban the game.

However, the Centre for Internet and Society in India stated that after a full investigation, there was no evidence linking any death to the controversial game or its application.

“The internet activities, device activities, call records, social media activity, and forensic evidences were analyzed. We investigated the rescued victims associated with the claimed game but there was no established evidence,” the internet watchdog center informed The Hindu.

In Bangladesh, the Telecommunication Regulatory Commission advised the Bangladeshi High Court to order a six-month ban on special night-time internet packages provided by various mobile operators across the Muslim South Asian country to curb suicides resulting from the game. 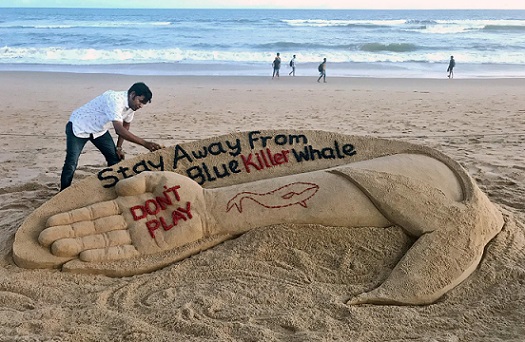 Local media investigations in different countries have discovered a number of attempted suicides and a flock of teens being treated at hospitals after playing “Blue Whale”.

All the reported suicides bear same similar features of teens dead at night in their rooms with specific scribbled handwritten notes that include symbols and drawings of the Blue Whale game.

The deadly game requires its players to begin with a task of watching certain horror movies after waking up at 4:30 am followed by a self-harm challenge, then leading up to the final challenge of suicide by hanging or jumping off a high building.

As part of its final mission, the game has an instruction of keeping it in complete secrecy, and that users have to delete it before committing the “suicidal challenge”.

Blue Whale game – or ‘Siniy kit’ in Russian as its claimed creator Philipp Budeikin named it – started to gain prominence in 2013 among members of a Russian social media group called ‘F57’ on VKontakte network.

The 21-year-old Budeikin was a psychology student before being expelled from the university.

The Russian police arrested him in Saint Petersburg and he was prisoned in 2016 after admitting he wanted to “cleanse society from invaluable persons through the game by pushing them to suicide.”

Some sociological and psychological experts such as the Indian psychiatrist Dr. Achal Bhagat suggest Blue Whale was “originally a sensationalized social media phenomenon that led to instances of imitative self-harming and copycat groups, leaving vulnerable children at risk of cyberbullying and peer shaming,” he told the BBC.

Islamic Shari’ah makes it clear that human life is sacred.

Life can’t be taken without justification and the right to life is inherent in the tenants of Islam. Life itself is a gift from Allah the Creator that we are obliged to care for.

In the Holy Qur’an there are sanctions against suicide. {And do not kill yourselves. Surely, God is Most Merciful to you.} (Quran 4:29). Another Qur’anic verse says: {And do not throw yourselves in destruction.} (Quran 2:195).