CAIRO – The contact to construct Islamic faith museum in Makkah has been awarded to a London-based architecture company, a building that will showcase the history of Islam and life of Prophet Muhammad (peace be upon him) to millions of visitors to the holy city.

“The Makkah Museum will offer a unique interpretation and reflection of faith to the millions of Muslims who visit Makkah from around the world and who, up until this point, have had no cultural institution of this kind to enhance their visit to the holiest of Muslim cities,” London-based Mossessian Architecture said in a statement cited by De Zeen magazine on Friday, January 15.

The building will include 5,600 square meters of gallery space to host exhibitions related to the international practice and history of Islam and the life of Muhammad.

The contract was presented by Mossessian which teamed up with Paris exhibition architects Studio Adeline Rispal.

Rispal designed a central void inside the structure to act as a “virtual minaret” that visitors ascend as they move through the exhibitions.

“Mossessian Architecture has delivered this by devising a continuous ramp system to ascend the void, with a parallel spiral staircase for the descent,” explained the firm.

“Both circular (like the celestial sphere) and ascending (symbolising the spiritual journey), the central minaret-shaped void calls upon the Muslim community to transcend earthly concerns through their faith – and pursuing the quest for knowledge onwards into infinity.” 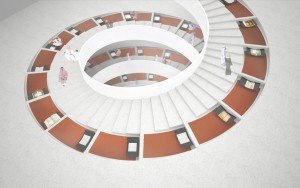 Visitors will ascend a “virtual minaret” as they move through the exhibitions.

Exhibits and panoramic film displays will occupy either side of the ramp travelling up through the space.

At the top, visitors will be able to access a climate-controlled garden space, which is designed to be usable even in the extreme heat of Saudi Arabia’s summers.

The underside of the spiralling stairs leading back down will be inscribed with the 99 Names of Allah, the names of God in Islam, which will be viewable from a dedicated gallery space at the bottom.

The outside wall of the museum will incorporate stone sourced from every country in the world where Islam is currently practiced. Hujaz rock from the mountains around Mecca will be used for the interior.

The Makkah Royal Clock Tower in Mecca was the second-tallest building in the world until the completion of Gensler’s Shanghai Tower earlier this month.

Mecca’s closest airport is in Jeddah, the country’s second biggest city, which has a dedicated hajj terminal.

Jeddah is also set to become home to the world’s tallest building – the Kingdom Tower currently under construction is expected to have a height of 1,000 metres.