No more than a decade ago, the North Hemisphere’s Muslims used to observe the holy month of Ramadan fasting in bearable weather conditions, and this was the case for nearly three entire decades, from 1987 onward.

So the majority of the world’s 1.8 billion Muslims and most of the regions that lie in the North Hemisphere used to welcome a wintry Ramadan.

However, in the 21st century, Ramadan has fallen in the hottest months of the year, June, July, August. This year Ramadan, for instance, will be observed from May to June.

Is there a reason for this switching? Why Ramadan in spring this year?

The Hijri calendar is one of the lunar calendars, meaning that it depends on the Moon phases for timekeeping. So normally, its date calculations would be different from other systems of calendars like the solar calendars and lunisolar calendars which depend on other methods of calculations. 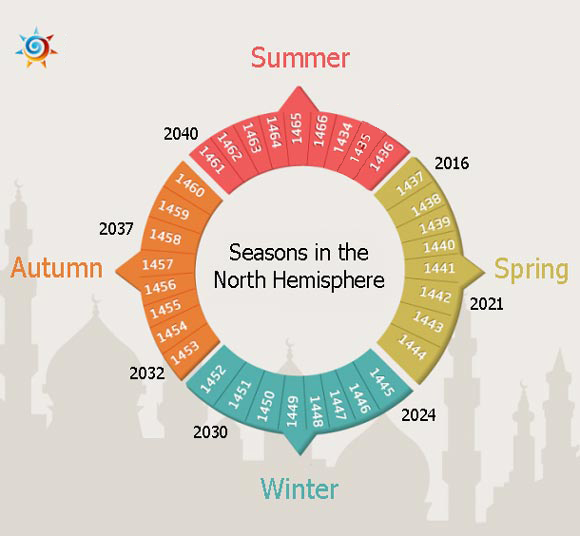 Because the Hijri calendar is between 10 and 12 days shorter than the Gregorian calendar which is used as an international civil year, the Hijri year begins 10 to 12 days earlier every Gregorian year.

Once every 33 or 34 Hijri years, – 32 or 33 Gregorian years –  the beginning of the 1st month, Muharram, coincides with one of the first ten days of January.

The Hijri year moves backward from December to January passing through the entire Gregorian calendar.

Accordingly, the Hijri year of 1429 occurred entirely within the year of 2008. Such coincidences occur once every 33 or 34 Hijri year, as mentioned above.

Furthermore, since the weather seasons on Earth depend on the Sun and its apparent position, but not the Moon. And since the Gregorian year is a Solar calendar that depends on the Sun for its date calculations, so we always find June marking the Summer Solstice.

This means that June and Ramadan overlap with each other every 32 to 34 years. Based on this, Ramadan will return to coincide with the summer of the South Hemisphere in nearly 2024.