As the majority of Muslims observe the first day of Ramadan on Monday, May 6, many countries are set to fast with shorter hours than previous years, as Ramadan falls just before summer months this year.

Annually, Hijri years arrive 11 days earlier in respect to the solar Gregorian calendar. This yearly shift makes the holy 9th Hijri month of Ramadan to move through the seasons in a 33-year cycle.

Similar to the previous year, majority of the Muslim World, located in the Northern Hemisphere, will observe Ramadan during spring.

This means that the fasting hours in the North Hemisphere this year will be a few minutes shorter than 2018.

Muslims in Murmansk, Russia, only has 3 hours of darkness, before the sun rises again at 1.41 am. In Iceland, Sweden and Alaska, Muslims will fast for more than 19 hours a day.

In Oslo, Copenhagen, Edinburgh, and Stockholm Muslims will fast for more than 18 hours/day.

While the city of Ushuaia in Argentina has the shortest fasting time in the world, 11 hours to be specific. The sun rises at 6.57 am and sets at 5.57 pm, Gulf News reported.

In the Qudsi hadith: on the authority of Abu Hurayrah (may Allah be pleased with him) from Prophet Muhammad (PBUH), who said: “Allah (mighty and sublime be He) says: “Fasting is Mine and it is I Who give reward for it. [A man] gives up his sexual passion, his food and his drink for My sake.”

For the few Muslim nations lying in the Southern Hemisphere, such as South Africa, and for Muslims living in countries like New Zealand and Argentina, currently experiencing autumn, fasting hours will be as short as 12 hours. 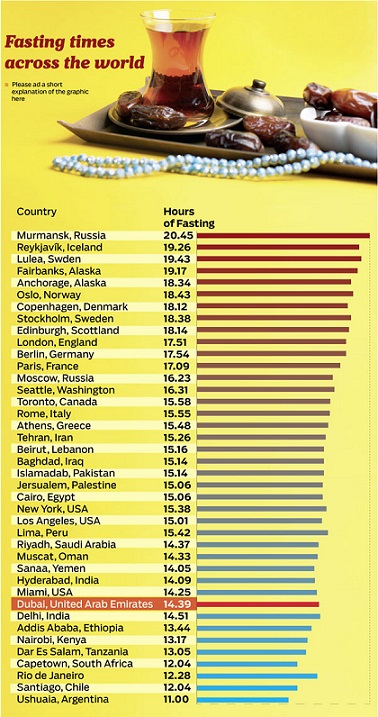 References to daylight and night hours are in accordance with the geographical measurement of latitudes which merely represent physical locations on Earth.

Latitude is defined as “the angular distance north or south from the earth’s equator, measured through 90 degrees.”

The length of daytime on any date, and therefore the length of fasting hours, is the result of visible sunlight, as may be apparent at any given coordinates on Earth.

Unlike gaseous celestial bodies, the Earth is a rocky planet; thus, time passes similarly with the same pace in all its locations, depending on the latitude.

But, it’s the angle of the sun in relation to the Earth’s horizon at any given location which determines the length of daylight hours.

Praying at the extreme north and south latitudes, as covered by Islamic ruling, has some leniency allowed due to the apparent number of sunlight hours.