The first ever picture of a black hole: It's surrounded by a halo of bright gas
aaa

The first ever photo of a black hole in a distant galaxy was released Wednesday, April 10, after being photographed by a network of eight telescopes across the world.

“What we see is larger than the size of our entire Solar System,” Prof Heino Falcke, of Radboud University in the Netherlands, who proposed the experiment, told BBC News.

“It has a mass 6.5 billion times that of the Sun. And it is one of the heaviest black holes that we think exists. It is an absolute monster, the heavyweight champion of black holes in the Universe,” he added, saying that the black hole was found in a galaxy called M87.

Details have been published today in Astrophysical Journal Letters. 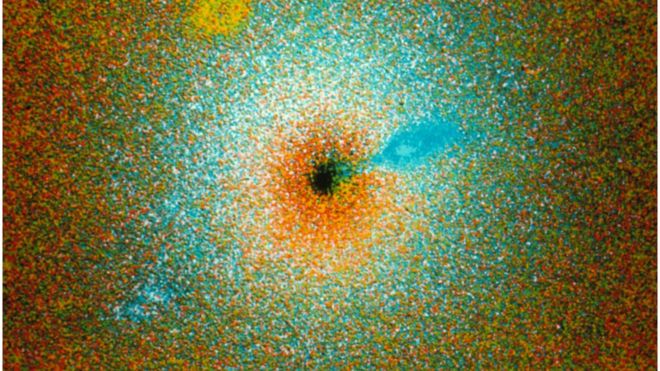 The image shows an intensely bright “ring of fire”, as Prof Falcke describes it, surrounding a perfectly circular dark hole. The bright halo is caused by superheated gas falling into the hole.

The light is brighter than all the billions of other stars in the galaxy combined – which is why it can be seen at such distance from Earth.

Black holes are the only objects in the universe with a gravitational pull so strong that even light can’t escape.

While they trap everything behind their event horizon, black holes seem mysterious to be an infinite source of intrigue and news stories as well.

“Indeed, in the creation of the heavens and the earth and the alternation of the night and the day are signs for those of understanding.” (‘Al Imran 3:190).

What is a black hole?