WASHINGTON – Two Egyptian teams succeeded on June 23 to win the 2018 international student MATE underwater robotics competition in USA, according to Ibrahim Farouq, an Egyptian team member, who announced the achievement on his Facebook account by saying:

“We defeated the Russian team and topped the list of ROV MATE.” 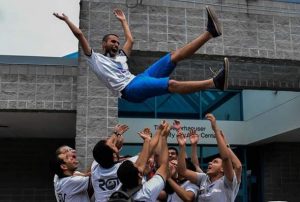 More than seven students representing universities, schools and scientific organizations from Egypt, Indonesia, Morocco and Turkey participated in the famous international competition which took place between June 21 and 23 at Weyerhauser King County Aquatic Center in Washington.

Hundreds of students in more than 80 teams from 19 countries competed at the 17th edition. The Marine Advanced Technology Education (MATE) and its sister organization, MATE Inspiration for Innovation (MATE II) Center annually hold the science event.

The Egyptian team ‘Vortex Titans’ from Alexandria University which achieved this year’s 1st place has previously achieved the third place in 2017 competition which was held in California, USA.

Students are challenged to design and build underwater robots, also known as remotely operated vehicles (ROVs), to complete missions based on scenarios in the workplace.

According to Cision PRWeb, the role of ROVs during this year’s competition is to support underwater archaeology, seismology, and renewable energy activities in the Pacific Northwest. 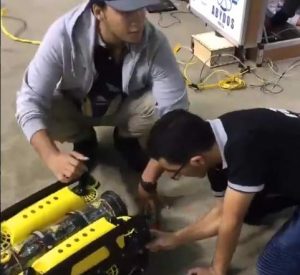 MIA team preparing for one of the competition missions. Picture credit: Arabrov

Students compete to create mock companies and work to “manufacture, market and sell” their product, i.e. an ROV. Then, they operate it before a panel of judges.

Live streaming of the underwater action via underwater cameras and topside screens was hosted by NASA’s Robotics Alliance Project.

MATE II is a nonprofit corporation whose mission is to inspire students to learn and apply scientific and technical skills.

ROVs are generally linked to a host ship by a neutrally buoyant tether. Sometimes when ROVs work in deeper water, a load-carrying umbilical cable is used along with a tether management system (TMS).

Most developers equip ROVs with at least a video camera and lights. They usually add additional equipment like sonars, magnetometers, still camera, and a manipulator or cutting arm.