SAKARYA – A Muslim Turkish woman has completed her late husband’s Islamic calligraphy artwork in a mosque in Söğütlü, Sakarya which he left unfinished due to his sudden death, Yeni Safak reported on February 28.

“Honestly, I fell in love with my husband’s work. I’ve discovered my passion for Islamic calligraphy after I started to help my late husband in the mosques he was working on decorating,” Çiğdem Ak expressed.

The 53-year-old woman said that she pledged to the local Turkish authorities to finish the incomplete work of her husband as promised.

The deceased Islamic calligraphy master Mehmet Ak had decorated many mosques across Turkey and devoted his life to the Islamic artworks until he died in November last year.

Underlining her literature and visual arts enthusiasm, “Islamic calligraphy art is also about people’s feelings. My husband had never used pattern templates, he always created the paintings in his mind,” she explained. 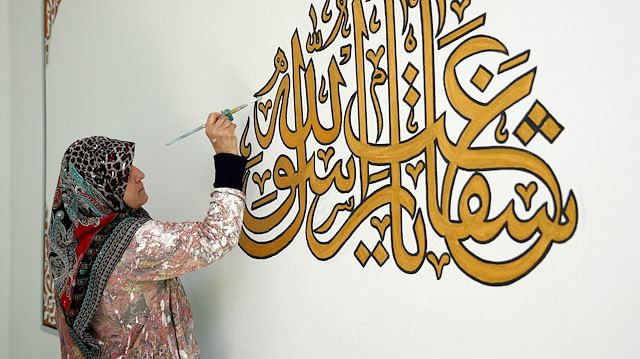 Islamic calligraphy is the artistic practice of handwriting and calligraphy, based upon the Arabic alphabet in the countries of the Islamic World where people and nations share a common Islamic cultural heritage.

However, Islamic calligraphy isn’t limited to strictly religious subjects, objects, or spaces. Like all Islamic art, it encompasses a diverse array of works created in a wide variety of contexts.

The prevalence of calligraphy in Islamic art isn’t directly related to its non-figural tradition; rather, it reflects the centrality of the notion of writing and written text in Islam.

In general, Islamic calligraphy developed from two major styles: Kufic and Naskh. There are several variations of each, as well as regionally specific styles.

The art of Islamic calligraphy has also been incorporated into modern art beginning with the post-colonial period, as well as the more recent style of calligraffiti.