GLASGOW – Despite the fact that Sannah Hussain was born with weak muscles and serious visual impairment, the fit, strong Muslim woman has a steely determination to succeed in the boxing ring.

“I’ve always been a go-getter, I’ve always wanted to be up and about, doing things.”

Sannah is a Scottish Muslim who wears a headscarf and dresses modestly and also lives with a series of debilitating health conditions.

The 25-year-old was born with Albinism, a condition which affects the color of her hair, the pigment in her skin, and has caused a serious visual impairment.

She also has an autoimmune condition, called Myasthenia Gravis, which causes muscle weakness and fatigue.

To feed her passion for boxing, Sannah started a class for women from minority groups at the Kynoch Boxing gym in Glasgow’s Kinning Park, as part of her job with the Human Appeal charity earlier this year.

“We arranged to have the gym closed off to anybody else at that time of day, so the girls could come in, take their hijabs off and feel comfortable with what they’re wearing and focus purely on the working out and not feel self-conscious,” Sannah said.

“It’s really helped break that barrier that women can’t do this, or women of this community can’t do this because they certainly can.

“Like everything in life, it’s just about finding a way around the things that are challenging.” 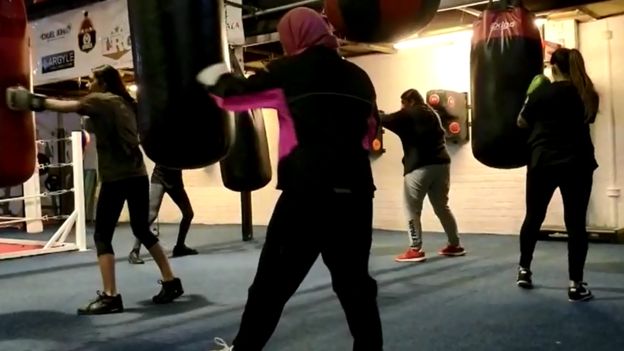 The project had a great effect on the young Muslim woman herself.

Sannah says she has lost weight, gained confidence and seen her overall fitness improve since setting up the classes in February.

“I didn’t realize how much I would fall in love with it,” she said.

“Even though it makes me tired and sometimes sick of being here, overall I love doing something that makes me feel independent.

“This isn’t about being part of a team, it’s about what you put into it is what you’ll get out of it.

“Although I may never be as successful as other people, I can certainly see an improvement in myself, in my own happiness.”

The new training regime has also given Sannah confidence to push herself further, despite the limitations of her medical conditions.

“Coming in here, you’re training so hard sometimes that you really just want to stop,” she said.

“When you overcome that barrier, it makes you realize that there’s so much more you can probably do that you didn’t realize and you want to discover those things.”

Sannah wants to use the fight to break down barriers to the sport and raise money for children who don’t get similar opportunities.

“I’m literally fighting for their right for survival,” she said.

Muslim Boxer on a Mission to Improve Life for Orphans