LONDON – A growing number of Muslim youth in the UK and across the world are taking to cyberspace to find their life partner, finding traditional methods of finding a life partner as inapplicable.

“For me to meet a Muslim man, I need to do something different, so that’s what I’m doing,” Arzo Kazmi told AlJazeera on Sunday, November 27.

Kazmi has been looking for a husband for eight years. Yet, a long time of matchmakers, mutual friends, and dating websites has been futile in finding that special someone.

“It feels like for ever,” says the 33-year-old financial adviser from Birmingham who is of Pakistani-Kashmiri heritage.

For the past four weeks, she has been using Muzmatch, a smartphone app for Muslims to meet potential marriage partners.

The app specifically caters to Muslims searching for a spouse, giving young Muslims greater influence in finding the right mate.

Like Kazmi, Nilima Thakur, not her real name, a 25-year-old teacher living in southeast England has been frustrated with this set-up.

“I’ve gone through family and that was just a disaster,” says Thakur, who was born in the UK and is of Bangladeshi descent. “I think it’s a very peculiar way to get to know someone.”

“Although my family have my best interests at heart, only I know what I’m really after,” Thakur adds, noting that she’s interested in a combination of Islamic principles and an engaging personality in her future partner.

Sana Ikram, 24, was searching for two years for a husband in her southwestern hometown of Swindon.

“Networks only extend so far and that doesn’t always provide a result,” she says.

Ikram was luckier than Kazmi and Thakur, meeting her husband who was using the same Muzmatch app.

They chatted on WhatsApp and met in person a month later. Ikram told Hakim that if he was serious, then he would have to meet her mother. After several family meetings, Hakim formally proposed.

The couple were married four months after their first meeting. 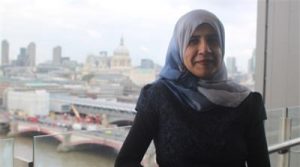 The internet is allowing young Muslims to find like-minded individuals, where traditional methods and networks are not, Shelina Janmohamed explains [Rhodri Davies/Al Jazeera]

Growing up with a mix of modern local values and Islamic principles, new Muslim generations were seeking like-minded individuals as their partner.

“Second, third, and even fourth-generation Muslims in the diaspora have grown up feeling very much part of the society they are in,” Shelina Janmohamed, the author of the books ‘Generation M: Young Muslims Changing the World’ and ‘Love in a Headscarf’, told Al-Jazeera.

“If anything, they are asserting their faith more strongly, but in a way that will connect to the wider world around them,” Janmohamed added.

The app markets itself solely to Muslims seeking marriage. It claims to have more than 120,000 users across 123 countries, about two-and-a-half years after launching. About two thirds of users are men.

The UK, its home country, is its biggest market, followed by the US, Canada, Pakistan and Australia, but it also caters to singles in Indonesia, India, Morocco, Malaysia, and Saudi Arabia, among others.

Globally, one in five relationships now start online, and the industry presents large economic potential. In the UK, for instance, between 2001 and 2011, Muslims were the fastest growing religious group – from three percent to 4.8 percent of Brits identifying as Muslim – to a total of 2.7 of the population. 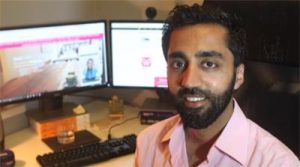 Shahzad Younas is the CEO of Muzmatch [Rhodri Davies/Al Jazeera]

Muzmatch’s founder and CEO, Shahzad Younas, told Al Jazeera that he wanted to create a “serious, safe community” of “quality individuals” and hopes the app will break down barriers between Muslims of different cultural backgrounds.

“I think the new generation are more open to saying if you’re Muslim and I’m Muslim, then what’s the problem? We make life difficult for ourselves by putting barriers up between ethnicities.”

Ajmal Masroor – a 45-year-old imam born in Bangladesh but brought up in the UK, a broadcaster and a founder of the Barefoot Institute in London 15 years ago, which provides marriage advice and support for couples, says new generation has bigger aspirations than their parents.

“Their aspirations are bigger and wider. They are more inclusive in their approach; they are more British, perhaps more international,” as opposed to their parents who may have grown up in villages and towns in South Asia, for instance.