BRADFORD – Thousands of Muslims joined marches of peace in Bradford and Bolton to mark the birthday of Prophet Muhammad (peace be upon him) on Tuesday, November 26.

“We would like to emphasize that the message of the procession is and has always been to spread a message of peace, compassion, and tolerance,” Mohammad Riaz, chair of Bradford Grand Mosque, told The Telegraph & Argus.

“We want to show this is the true message that the Prophet Mohammad, peace be upon him, brought for mankind. We thank all our friends and the whole local community who have joined us today in celebration.”

Earlier in the day, guest speakers had addressed crowds at the mosque while also enjoying food served throughout the day.

The procession has been running for decades in Bradford and attracts attendees from the local community and all over the UK.

“There are many events held throughout the UK, in-fact throughout the world, during this month to honor the birth of the Prophet, peace, and blessing be upon him,” Junaid Ali, who traveled from Peterborough in Cambridgeshire for the event, said.

“I have traveled quite some distance to join the community of Bradford in celebration as the atmosphere and warm welcome you receive by the people here is unmatched anywhere else.”

Mohammad Ayub, who organized the march, added: “We would like to thank all our volunteer teams and everyone who has helped to make the event an amazing success including the traffic management team and all local organizations and businesses who have always supported us.”

Mohammed Naveed Sialvi, the headteacher at STI, said: “Every year at the time of the Prophet Mohammed’s birthday, we celebrate the message he brought by contributing to a good cause in our local community.

“The fundraiser is part of the Annual Milad Activity Week held at STI School to mark the birth of the Prophet Mohammed and has been a regular feature in our annual calendar for nearly ten years.

“Over those years we have raised thousands of pounds that have been distributed to a variety of noble causes such as Marie Curie Cancer Care, Bradford Food Bank and have also distributed toys and gifts to children undergoing treatment at the local hospitals.” 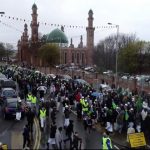 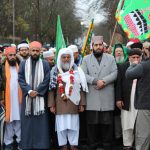 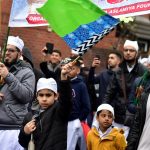 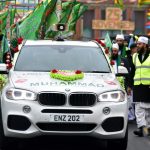 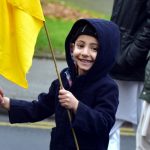 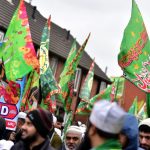 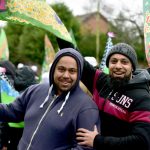 A few miles away from Bradford, another march of peace was organized by Bolton Muslims.

The group set off from the Makkah Mosque to walk around Great Lever Tuesday afternoon.

“We are here to celebrate the birthday of the Prophet Muhammad,” one of the event organizers, Shehzad Arif, who lives in Halliwell, told The Bolton News.

“It is a global event for everyone, and the aim is to spread peace and harmony, which are the true teachings of Islam.

“We have had more than 30 coaches from across the UK so that people could be here today.”

Zahir Hussain was part of a large group that had traveled from Bradford to take part.

“The walk is getting bigger and bigger every year,” he said.

“It does not matter what background people are from, everyone and anyone is welcome.”

The Prophet’s birth falls on the 12th day of Rabi-ul-Awwal (the third month in the Islamic calendar).

Many Muslims see the Prophet’s birthday as an important time to learn about and reflect on the life of Muhammad, peace, and blessings be upon him.

Lectures and speeches are often recorded and published as podcasts.

Around the world, celebrations of the Prophet’s birthday include stalls selling Islamic books, leaflets, clothing, prayer mats, and other materials.